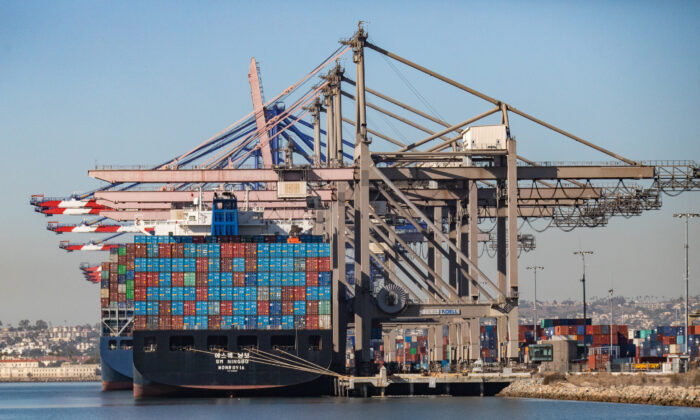 Cargo ships and crews rushed to unload and move containers at the Los Angeles and Long Beach ports in the face of new fines which went into effect Nov. 1.

A record number of cargo ships continue to flood the ports as they waited to offload their goods, according to the Marine Exchange of Southern California.

“We have had movement all throughout the day,” said an exchange staff member.

At 4 p.m. Oct. 31, 27 ships were at the pier unloading goods; 40 container ships were at anchor waiting to be assigned a berth, and 53 ships were drifting nearby, waiting to either go to anchor or get a berth, whichever came first, according to the Marine Exchange of Southern California.

The scramble at the ports came on the heels of an announcement last week by port authorities that cargo carriers would begin facing fines for allowing shipping containers to sit too long on already overloaded terminals.

Containers were stacked at filled port storage areas around the docks and adjacent land, as streams of trucks and trains carried goods away from the docks.

The Long Beach Board of Harbor Commissioners on Oct. 29 announced the new fees, and the Port of Los Angeles board approved a similar measure the same day.

The ports will charge $100 a day for each container left for more than nine days if the container will be moved by truck. Rail carriers will be charged after six days.

Port authorities originally said rail carriers would be charged after three days, but looked at the situation, talked with stakeholders, and extended the time, according to Port of Los Angeles Spokesman Phillip Sanfield.

Port authority officials based these times on historical data that showed how long cargo typically dwelled on terminals “pre-surge,” Sanfield said. For trucks, that was about four days, and for railways, it was less than two days.

Sanfield said last week the move is not designed to increase the ports’ revenue.

Port and local officials who approved the fees received backlash across a spectrum of shipping companies and retailers. They have since backed off the original fee declaration, saying they could delay the fee if companies make sufficient progress in clearing containers.

“If progress is being made clearing our docks, I have the discretion to delay the start of fees beyond Nov. 15,” Port of Los Angeles Executive Director Gene Seroka said in a news release. “Our goal is to see significant improvement on our docks so that we don’t need to administer any fees.”

Some shipping firms and trade groups said last week they worry that the new fine would trigger “catastrophic”results, including an increases in prices for consumers.

“As far as the [fines] announced in Los Angeles/Long Beach, I think it will be catastrophic,” Rich Roche, vice president of international transportation at Mohawk Global Logistics, said during a meeting with other trade groups last week, reported the shipping industry magazine FreightWaves.

Some national retailers have chartered private, smaller cargo ships to ensure they get their products on shelves before the holidays.

Walmart, Target, Home Depot, Costco, Dollar Tree, and Coca-Cola are just some of the retail chains or corporations to have entered into long-term leases with private shipping companies. This means they can dock at smaller ports, which have not been affected by the unprecedented clogging, and offload their cargo quickly.

“We’re currently in the midst of red-hot freight and charter markets,” Youroukos said.

By chartering their own cargo ships, larger chains and retailers are able to stock their shelves with holiday items and needed goods more quickly, bypassing the commercial ports.

Larger cargo ships carry multiple containers and are obligated to dock at the Los Angeles or Long Beach ports, or other commercial ports that are already seeing substantial backlogs.

With a smaller ship, Home Depot avoided the Port of Los Angeles’ container logjam by docking its chartered ship that docked 125 miles south to the Port of San Diego, according to Reuters.

The Port of San Diego can handle fewer containers and only one or two ships per month until the end of the year, according to Reuters.

The cost to charter the private cargo ships, mean might add to expected higher holiday prices for consumers.

The average cost of shipping a standard large container has surpassed $10,000, some four times higher than a year ago, according to The Economist.

“The spot price for sending such a box from Shanghai to New York, which in 2019 would have been around $2,500, is now nearer $15,000. Securing a late booking on the busiest route, from China to the west coast of America, could cost $20,000,” according to The Economist.

Home Depot told CNBC this summer that it had chartered its own ship to avoid the crowded ports.

“We have a ship that’s solely going to be ours and it’s just going to go back and forth with 100 percent dedicated to Home Depot,” President and Chief Operating Officer Ted Decker said in a June interview with CNBC.

This is the first time in the company’s history it has taken such a step.

The Epoch Times requested a comment from the Port of San Diego but did not receive a response before press time.