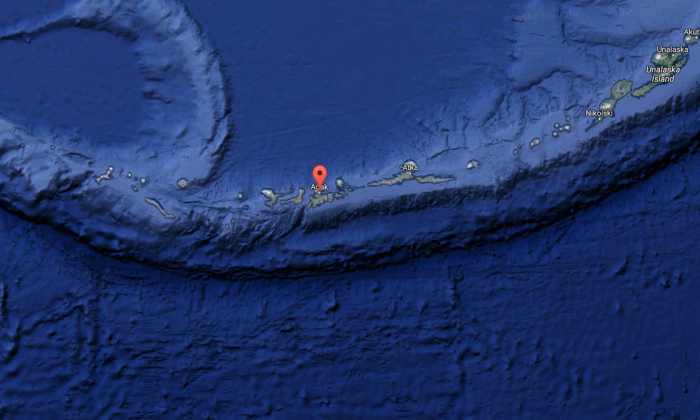 There were no reports of any injuries as the good Samaritan vessels rescued the crew members Tuesday evening, Coast Guard Petty Officer Lauren Steenson said.

The ships then began a 13-hour voyage to port in Adak, Alaska.

When the 220-foot Alaska Juris started taking on water Tuesday, all crew members donned survival suits and got into three rafts.

The Spar Canis and the Vienna Express rushed to the scene in response to the Coast Guard’s emergency broadcast for help, as did two other merchant vessels.

Video footage showed one of the bright orange life rafts floating some distance from the stricken boat, while another appeared tethered to it. The Coast Guard footage shot from an aircraft also showed a merchant ship in the distance, apparently headed toward the scene.

The Coast Guard also diverted the cutter Midgett and dispatched two C-130 transport planes and two helicopters from Kodiak to the site of the sinking ship, located near Kiska Island, which is about 690 miles west of Dutch Harbor, one of the nation’s busiest fishing ports.

It wasn’t immediately known what caused the Alaska Juris to begin taking on water, and that will be part of the Coast Guard investigation, Steenson said.

Conditions on the Bering Sea were calm, but there was low visibility because of heavy fog, Coast Guard Chief Warrant Officer Joseph Ayd said.

It’s not the first trouble the Alaska Juris has encountered in recent years.

In May 2012, the crew of the Alaska Juris requested help from the Coast Guard after three crew members were exposed to ammonia after a leak when the ship was just north of Cold Bay, Alaska. The Coast Guard flew the trio to Cold Bay, where an airplane was waiting to fly them to Anchorage.