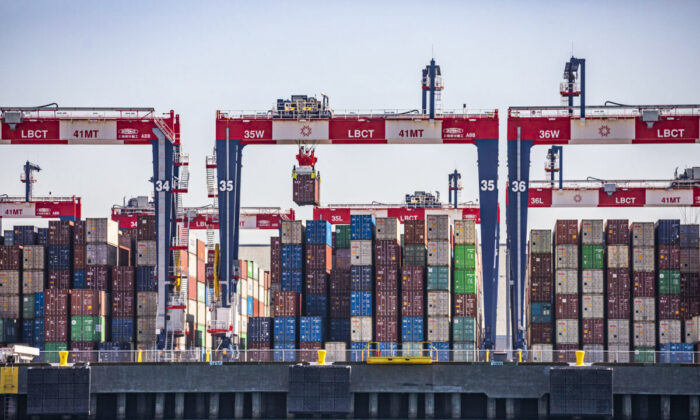 Top shipping officials this week said that a Biden administration-backed plan to issue emergency fees for containers lingering too long won’t work and will lead to chaos.

Earlier this week, the ports of Los Angeles and Long Beach in California announced they would fine ocean carriers for containers that stay too long at port terminals. They said the move is designed to alleviate supply-chain bottlenecks, coming after President Joe Biden pressed the heads of the California ports to move to 24/7 operation.

“We must expedite the movement of cargo through the ports to work down the number of ships at anchor,” Port of Los Angeles Executive Director Gene Seroka said in a news release about the fine. Starting next month, port officials will charge $100 per container that lingers after nine days by truck and six days by rail, increasing $100 every day.

But two days later, the officials who attended a meeting of the National Shippers Advisory Council (NSAC)—comprised of 12 importers and 12 exporters including Walmart, Amazon, and Home Depot—said the port fees are “crazy” and “catastrophic.”

“As far as the ‘hyper-demurrage’ announced in Los Angeles/Long Beach, I think it will be catastrophic,” Rich Roche, vice president of international transportation at Mohawk Global Logistics, said during the NSAC meeting, reported FreightWaves.

Roche and others said during the meeting federal or state officials need to step in and halt the plan.

“Chassis are already in short supply and this will artificially suck out the rest of the containers that may be sitting in there [at terminals] that didn’t need to be on a chassis and now they’re going to be parked somewhere. It’s probably going to wipe out whatever’s left in terms of chassis,” he added.

Bob Connor, executive vice president of global transportation at Mallory Alexander International Logistics, also said that the move “came out of left field,” adding: “I don’t see this charge doing anything but adding more cost, and freight rates being what they are, this is the last thing we need.”

And Ken O’Brien, president of Gemini Shippers Group, said that “what was done this week at the ports of Los Angeles and Long Beach is effectively an indirect tax on the American consumer,” according to the report.

Officials at the Port of Los Angeles, however, told the Daily Breeze that there are 94,142 containers sitting on the docks as of Monday, with more than 40 percent having sat there for more than nine days.