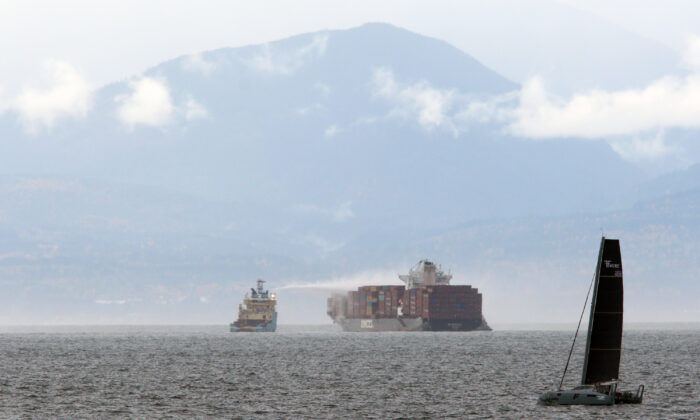 Ships work to control a fire onboard the MV Zim Kingston about eight kilometres from the shore in Victoria, B.C., on Oct. 24, 2021. (The Canadian Press/Chad Hipolito)
Canada

Ship Fire Out, but Search Continues for Lost Containers From Vessel Off B.C.’s Coast

VICTORIA—A fire that burned for nearly a week on the container ship anchored off Victoria’s waterfront has been put out.

A statement from Danaos Shipping Co., the manager of the MV Zim Kingston, says the specialized marine service company it hired will begin the cleanup operation on the ship.

The statement says the same firm has been retained to search for the 109 containers that were lost overboard last week, around the same time the fire started on the ship.

The Canadian Coast Guard said in a statement Thursday that at least five containers have been spotted in the waters or washed ashore on the northern tip of Vancouver Island, more than 400 kilometres from the vessel.

At least two of the lost containers had hazardous materials, while others held Christmas decorations, sofas, appliances, car parts, toys and other everyday items.

The coast guard says trajectory modelling from the Department of Environment and Climate Change Canada shows that the containers that remain afloat will continue to drift north.