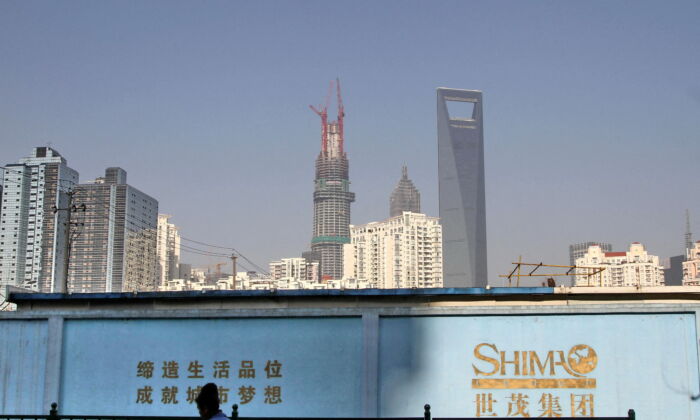 A wall carrying the logo of Shimao Group, with residential buildings and the financial district of Pudong in the background on January 1, 2013, in Shanghai, China. (Stringer/Reuters)
China Business & Economy

The Shanghai Stock Exchange briefly suspended trading of one of Chinese property developer Shimao’s bonds on Monday, following Friday’s suspension of trading in the firm’s five other bonds due to severe declines.

The trading halt came as Shimao’s unit in Shanghai defaulted on a loan after missing a payment of over $100 million last week, according to a lender’s letter obtained by Reuters on Thursday.

Unlike many of its Chinese peers, Shimao Group held an investment-grade credit rating, and did not breach any of the “three red lines” set by Beijing.

The group’s failure to make a loan payment heightened concerns that a liquidity crunch will spread further throughout the country’s embattled real estate industry.

In the letter to investors, China Credit Trust, a company that raised trust financing on behalf of the group, said that one of Shimao’s units had defaulted after missing a $103 million payment. Shimao responded that it was in talks over the payment, and that the matter would not affect its other debts.

Chinese financial media outlet Caixin reported over the weekend that Shimao had put its residential and commercial projects for sale, and had been seeking buyers since December.

Shimao attempted to dispel investors’ concerns about its debt on Friday. While facing liquidity pressures, the company has not defaulted on any of its public debt, and was taking measures to increase property and asset sales, as said in a statement by Shanghai Shimao Construction filed with the Shanghai Stock Exchange.

However, financial analysts have turned bearish on Shimao in the short term. Financial institute Daiwa Capital Markets warned on Monday that the group had plunged into a vicious cycle.

Daiwa added that the negative news will impede its ability to refinance and sell contracts, leading to a decline in cash flow.

Moody’s noted Shimao’s “weakening access to funding and large near-term debt maturities,” and kept it on review for a further downgrade.

Over the last six months, Chinese property firms have been under tremendous pressure because of Beijing’s measures to curb over-borrowing in the industry.

China Evergrande Group, the world’s most indebted developer at the center of the industry’s debt crisis, is struggling to repay more than $300 billion in liabilities, including nearly $20 billion of offshore bonds deemed in cross-default by ratings agencies last month after it missed payments.

According to Reuters, Beijing will make it easier for state-backed property developers to acquire troubled assets from debt-laden private peers, another attempt by the Chinese regime to avert an industry liquidity crisis.

“The market is watching how many SOEs [state-owned enterprises] will get more M&A [mergers and acquisitions] loans to help the developers in distress,” reported Reuters, citing Kington Lin, managing director of Asset Management Department at Canfield Securities Limited.