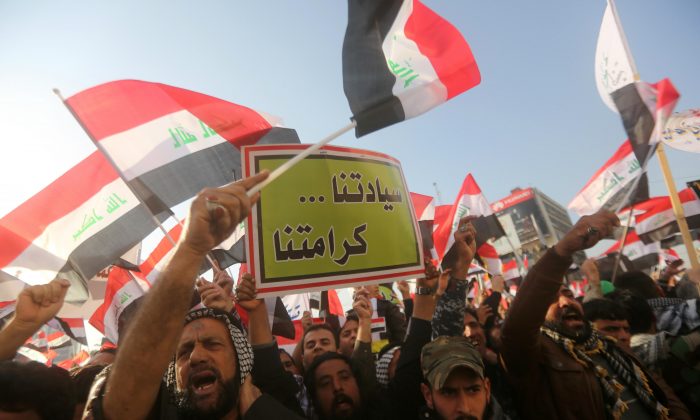 Iraqis hold a placard reading in Arabic 'our sovereignty is our dignity' during a demonstration, gathering mainly members of Shiite paramilitary forces, to demand the withdrawal of Turkish forces from Iraq, in Baghdad's Tahrir Square, on Dec. 12, 2015. Iraq says Turkey deployed troops and tanks to a base in the country's north last week without its permission, sparking a diplomatic uproar between Baghdad and Ankara. (Ahmad al-Rubaye/AFP/Getty Images)
Middle East

Crowds of young men in military fatigues chanted against Turkish “occupation,” vowing they would fight the Turkish troops themselves if they do not withdraw.

The demonstration Saturday, called for by the umbrella group of Shiite militias in Iraq whose power rivals that of the Iraqi army, was attended by militia leaders and some Shiite politicians.

Turkey has had troops near Mosul since last year but the arrival of additional troops last week sparked an uproar in Baghdad. Ankara subsequently halted new deployments.

Turkish President Recep Tayyip Erdogan repeated Friday that Turkey would not pull out troops already stationed in Iraq and that the training process “in agreement” with Iraq would continue.