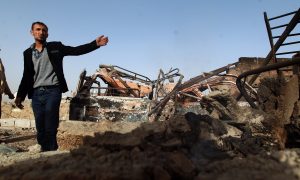 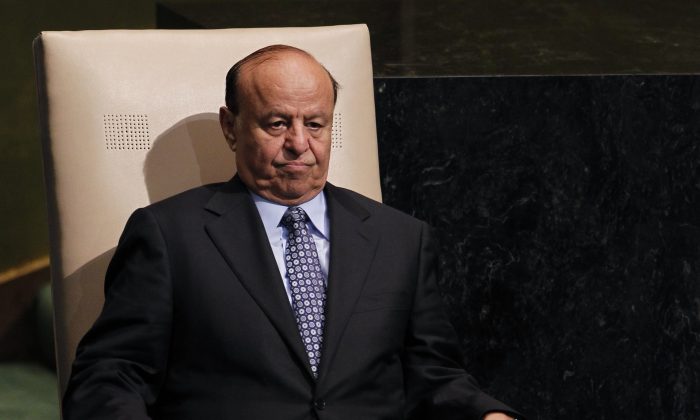 Abed Rabbo Mansour Hadi, President of Yemen, sits after addressing the 67th session of the United Nations General Assembly at U.N. headquarters on Sept. 26, 2012. Two of the Yemeni embattled president’s advisers said that the president is held “captive” in hands of Houthis and warned if submitted resignation in protest to Houthis’ power grab, to face prosecution. (AP Photo/Jason DeCrow)
Middle East

SANAA, Yemen—Shiite rebels holding Yemen’s president captive in his home reached a deal with the U.S.-backed leader Wednesday to end a violent standoff in the capital, the country’s state news agency reported.

The agreement promised to give the rebel Houthi movement more say in the affairs of the Arab world’s poorest country in exchange for the group removing its fighters from President Abed Rabbo Mansour Hadi’s home, the SABA news agency said.

However, the late-night deal left unanswered who really controls the country and how much power is still held by Hadi, a key ally in U.S. efforts to battle Yemen’s local al-Qaeda branch.

In the deal, the Houthis also agreed to release a top aide to Hadi that they had kidnapped in recent days.

SABA said the agreement included a clause that would answer the rebels’ demands to amend the constitution and expand their representation in the parliament and in state institutions. It also included promises to ensure better representation for Yemen’s southerners as well, the deal said.

The agreement also calls on Hadi to shake up a commission tasked with writing a draft constitution to ensure bigger representation for the Houthis.

The draft constitution has proposed a federation of six regions, something the Houthis reject. The agreement reached Wednesday night also ensures that Yemen would be a federal state, but doesn’t mention the six region proposal, saying controversial issues will be further discussed.

The agreement, while addressing the immediate Houthi takeover and security concerns in the capital, leaves the contentious political issues unresolved.

The Houthis, who took control of the capital in September, say they only want an equal share of power, while critics say that they prefer presence of Hadi as a symbolic leader while they keep a grip on power. Critics also say the Houthis are backed by Shiite power Iran, something they deny.

The increasingly weakened leadership and power vacuum are setting stage for al-Qaeda in Yemen, which claimed the recent attack on the French satirical newspaper Charlie Hebdo and failed assaults on the U.S. homeland, to grow more powerful in the chaos.

Aides to Hadi said earlier Wednesday that he was “captive” in his home. Soon after the agreement Wednesday night, there was no visible change in Houthi deployment outside Hadi’s house.