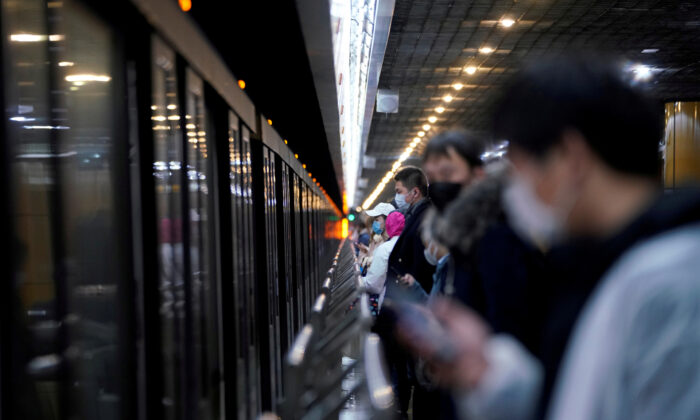 People wearing face masks are seen at a subway station in the morning after the extended Lunar New Year holiday caused by the novel coronavirus outbreak, in Shanghai, China on Feb. 10, 2020. (Aly Song/Reuters)
By Eva Fu

Conflicting numbers of new coronavirus cases reported by two Chinese regional authorities on Feb. 20 drew confusion and have raised further questions about the reliability of data on the outbreak from the Chinese regime.

According to China’s National Health Commission, virus epicenter Wuhan City, the capital of Hubei Province, recorded 615 new confirmed cases on Thursday—hundreds more than the total additional cases reported by the province itself, which reported only 349 cases.

Chinese health officials said the higher Wuhan numbers resulted from a change in the way they officially count infections, in accordance with a new guideline that came into effect a day earlier. This is the second change to the official count method for Hubei Province within a month.

Officials didn’t give an explanation for the change.

Then on Friday, Tu Yuanchao, vice director of the Hubei health commission, said they will add the missing 271 cases back to the data. The new Hubei Party chief, Ying Yong, has ordered whoever removed the numbers to be held responsible, according to Tu.

The confusion from the shifting reporting criteria has added to a growing sense of mistrust in the information released by the regime on the disease. The free flow of information in China has been restricted by tight censorship over media and online discussion of the severity of the outbreak. Meanwhile, official infection numbers have underreported the true scale of the outbreak because many patients suspected to have the illness have not been able to receive an official diagnosis.

As a result of the previous change in count method, for over a week, Hubei authorities had been reporting patients whose CT scans showed lung infections—known as “clinically diagnosed patients”—as confirmed cases. Prior to that, only those who tested positive through official diagnostic kits, known as nucleic acid tests, were treated as confirmed cases.

When the methodology was put into practice on Feb. 12, new cases in Hubei soared nearly tenfold to almost 15,000, with more than 13,000 of those being clinically diagnosed cases.

The new guideline released on Feb. 19, the sixth since the coronavirus disease broke out in China, advised the province to include only two numbers in the case count: suspected cases and confirmed cases, consistent with how other provinces and nations reported it.

The change led to a drastic drop in the daily tally, which was a fifth of the 1,693 cases reported a day earlier.

The National Health Commission said the Hubei figure of 349 cases in Hubei was a result of it taking out 279 clinically diagnosed patients from the tally, as they later tested negative in nucleic acid tests.

William Schaffner, a professor at the division of infectious diseases at the Vanderbilt University School of Medicine and the medical director at the National Foundation for Infectious Diseases, said the switching case count standards have made it difficult for outsiders to gauge the trajectory of the outbreak.

“If you’re changing how you count, the numbers over time are not reliable,” he told The Epoch Times.

“It has all of us who look at these numbers scratching our heads—we cannot tell whether the transmission of the virus has been reduced because of the quarantine,” Schaffner said. “We can’t tell because they keep counting cases in a different way.”

The key, he said, is consistency. If a change is necessary, one should explain the reasons clearly and “stick with the new one over time.”

“You don’t change it twice a week, because that’s just confusing. It must be confusing to the people who are doing it, as well as to everyone else,” Schaffner said.

Lack of clarity in case definition and flow of information have created challenges for epidemiologists trying to assess the outbreak.

Schaffner said the shifting definitions “makes you first of all confused and makes you suspicious: Why is there all this confusion?”

The outbreak has, according to official figures, resulted in tens of thousands of infections in China as well as over 2,000 deaths in China. There are at least 1,073 cases outside of China, with 621 from the Diamond Princess Cruise quarantined off the Japanese coast.

At least 29 foreign citizens have been diagnosed with the coronavirus in China. Two of them, a U.S. citizen and a Japanese national, have died of the disease, according to the country’s foreign ministry.

Over the past two weeks, Wuhan had conducted two rounds of door-to-door checks to screen for any potential cases. Chinese authorities stated that their goal was to provide hospitalization and treatment to all patients, and to have “no one left out.” But a number of patients, when speaking with The Epoch Times, said that they were never visited by health workers.

Wan Ping (alias) sought help for her 70-year-old father Wan Qiyuan on the government designated coronavirus channel on popular Chinese social media Weibo, hoping to get him hospital treatment. Her Feb. 19 post, however, was quickly deleted twice in the course of several hours.

The channel claimed it had not received requests from untreated patients for 48 hours from Feb. 17 to Feb. 18, according to its latest Weibo announcement. It has yet to release data for Feb. 19.