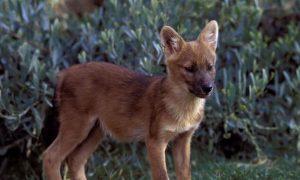 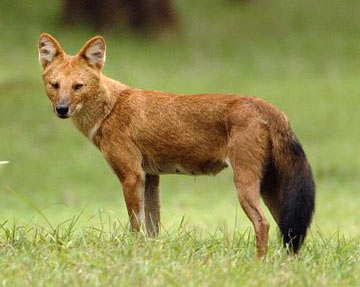 Photograph of a dhole (Cuon alpinus). Photograph courtesy of: Kalyanvarma under a CC-BY-SA-3.0, via Wikimedia Commons
News

Once found throughout much of Asia, the dhole—a wild dog species that looks something like a jackal—has been displaced by humans from much of its range. But a new study published in mongabay.org’s open-access journal Tropical Conservation Science, offers hope that the two species may be able to coexist, with people living next to protected forest areas in southeastern Thailand showing a favorable attitude towards increasing awareness and conservation efforts for the endangered canids.

Dholes (Cuon alpinus) are important predators in the tropical forests and grasslands of Southeast and Southern Asia. They are social and live in packs, working together to bring down medium to large ungulate prey. In areas where large predators such as tigers and leopards have disappeared, dholes may exist as the only carnivore large enough to prey on deer.

Unfortunately, dholes are quietly disappearing from the wild. In certain forests in southeastern Thailand and the rest of Southeast Asia, dholes have been targeted and eradicated by humans because of the common assumption that they kill livestock and people. However, according to the study, no predation assessments have been done, and there have been no official reports of dholes attacking people in Southeast Asia.

Dholes are found in several protected areas in Thailand. To investigate local peoples’ views on dholes and their conservation and what factors influence them, researchers from the U.S. and Thailand conducted interviews with local people in villages adjacent to seven of Thailand’s protected areas (Khao Yai National Park and six wildlife sanctuaries) over a period of about two years. Another main objective of the interviews was to assess local knowledge of dholes and perception of them as “nuisance predators.” A total of 791 respondents of at least 18 years of age were sampled in 34 villages that were within 10 kilometers (six miles) of a protected area. The study utilized Random Forests – an ensemble learning method used for classification and regression – to analyze responses to 20 questions concerning respondent demography: knowledge of, perceived occurrence of, and personal attitudes toward dholes, and frequency times a person visited the forest.

The study revealed most villagers held neutral or positive attitudes toward dholes, with only 12 percent of participants stating they believed dholes should be removed from the wild. One surprising result of the study showed that the majority of people interviewed had difficulty with proper photo identification of dholes and commonly confused them with jackals or “forest dogs.” The study also confirmed the presence of dholes in five wildlife sanctuaries where the species had not been recorded.

The interviews also generated reports by local villagers that the dhole population has been stable over the past decade and that only a few reports of livestock predation were linked to dholes. Dhole distribution is highly influenced by prey distribution and abundance, but human activities also affect their distribution. According to the study, areas in southeastern Thailand that lack ample wild prey for dholes were also the areas that experienced the highest rates of human-dhole conflict.

The authors stress the need for increased ecology education in local schools, more training for local conservation staff, and encouragement of students to “experience nature.” Overall, they write that they are “cautiously optimistic because overall there were a large number of people who held positive attitudes towards dholes, no reports of dhole attacks on humans, and very few reports of livestock predation by dholes. Overall, we found an encouraging social climate for dholes in Thailand. ”

This article was originally written and published by Alexander Montoro, a contributing writer for news.mongabay.com. For the original article and more information, please click HERE.