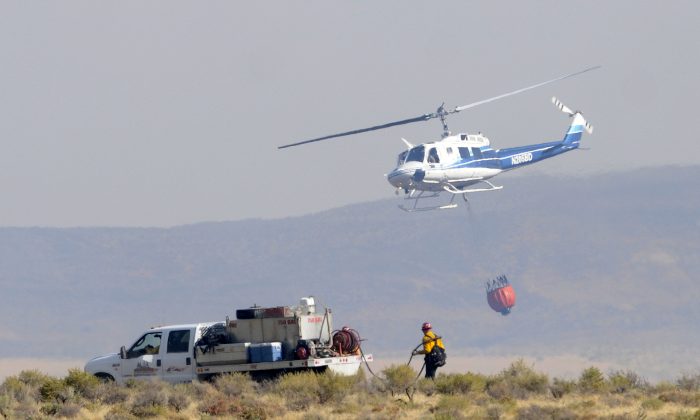 FILE - In this Aug. 14, 2015 file photo, a helicopter flies past a ground crew fighting a wildfire scorching grassland that ranchers need to feed cattle and which is also primary habitat for sage grouse, near the Reynolds Creek area in the Owyhee Mountains of Idaho. (Adam Eschbach/The Idaho Press-Tribune via AP, File)
US

Shift in US Firefighting Prioritizes Sage Grouse in West

RENO, Nev. — Federal agencies deciding how to deploy firefighters during one of the West’s worst wildfire seasons are considering a new factor in their deliberations: an imperiled bird that inhabits a vast stretch of sagebrush from California to the Dakotas.

Officials have already mapped out the greater sage grouse’s habitat west of the Rockies, where wildfire is considered a primary threat to the bird. They’ve positioned semi-trailer sized water containers in areas that need protecting. And wildlife biologists are advising firefighters.

While fire officials note that human life is the first priority, the shift in strategy comes as a Sept. 30 court-imposed deadline looms for the U.S. Fish and Wildlife Service to decide whether to list the bird as a threatened or endangered species.

The new strategy paid off in August. Firefighters were able to quickly protect all but about 1,000 acres of priority habitat during a 10,000-acre fire 120 miles northwest of Reno, Nevada, said Walter Herzog, the U.S. Bureau of Land Management’s fire management officer for Northern California.

There’s now an “acknowledgment that we are all sort of in this together,” said Nancy Haug, a BLM district manager in Nevada. “The fire team comes in now, understands the issue and is as interested as we are in trying to do the right thing in sage grouse habitat.”

The Interior Department, which includes Fish and Wildlife, has been keen to highlight government work to avoid listing the ground-dwelling bird because the stakes are high.

Biologists consider sage grouse the ecosystem’s “indicator species” — or barometer of the health of its habitat — as the northern spotted owl is in Northwest old-growth forests.

“Some people wish it wasn’t, but it’s a huge deal,” said Ron Dunton, assistant director of fire and aviation for the BLM. “If it’s listed, I tell people it will be the spotted owl times 50.”

Nobody pretends this year’s initial efforts to protect sage grouse habitat from fire in Nevada, Idaho, Oregon, Utah and California will make or break the bird. But officials hope an overdue investment in preventing and fighting fires will save money — and an imperiled ecosystem.

Wildfire is considered less of a threat than energy development in the bird’s eastern range — Colorado, Wyoming, Montana and portions of the Dakotas — but eventually the government will apply the wildfire strategy there, too.

Fighting invasive species with well-managed cattle grazing and seeding with native plants is a big part of the new approach that eventually will encompass the entire sagebrush steppe ecosystem covering an area of the West almost as big as Texas.

“There’s a lot of native vegetation that could grow in if given a chance,” said Mike Archer, a wildfire consultant and blogger in Glendora, California. “The problem is the cheatgrass is so hardy a breed that it just pushes everything else out.”

Not all sagebrush habitat is equal, however.

Some has little cheatgrass and is in good shape to rebound from fire. Other areas would require a major effort to restore after a wildfire. The Interior Department has classified sagebrush across the Great Basin to help firefighters decide which areas make the most sense to save.

“The first rule of thumb: Protect what is left. That is what we are trying to do — through strategy and planning — prevent further habitat loss,” Deputy Assistant U.S. Interior Secretary James Lyons said.

Lyons said he took notice when Fish and Wildlife Service Director Daniel Ashe candidly shared his biggest concern about the bird’s future. “He said that unless we can get a handle on fire, we may not be able to reach a point where we can be confident we can conserve the species,” Lyons recalled.

Firefighting now eats up more than half of the U.S. Forest Service budget. The BLM completed a “budget scrub” to reallocate resources for the sagebrush effort west of the Rockies.

John Freemuth, a Boise State University professor and public lands expert, said firefighters could question the government’s priorities under the new policy. “If there’s a habitat issue versus property, how do they reconcile that? How do they allocate resources when, as we’ve seen in the last few weeks, those resources are limited?” Freemuth said.

Dunton, the BLM’s assistant fire and aviation director, insisted field supervisors will decide where to deploy.

“I’ve been a line officer and a field officer, and those would not be easy decisions to make. But they cannot be made from Boise, Idaho,” Dunton said, referring to the National Interagency Fire Center government firefighting headquarters.

“It’s a bit of a cultural change,” he added. “But it’s just something that’s necessary.”