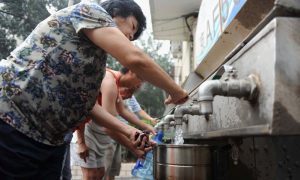 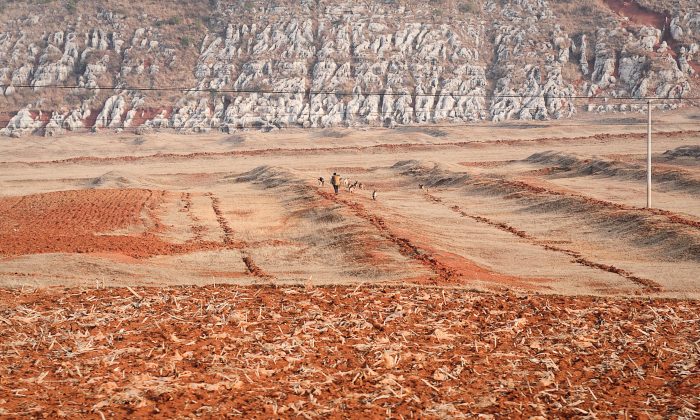 A Chinese farmer grazes his livestock on his dried-up field after an extended drought in Fuyuan, Yunnan Province, in 2012. Facing a food crisis, China relinquished its policy for grain self-sufficiency. (STR/AFP/Getty Images)
China

Shift in China’s Food Policy Spells Trouble for US

A policy change in China means that the country now imports more grain than it produces. This is bad news, not only for food security of China’s 1.3 billion people, but also for natural resources around the world.

China imported more than 63 million tons of soybean in 2013, a sixfold increase compared to 13 years ago, according to statistics from the Chinese regime. China’s soybean imports outweigh domestic production by 80 percent. The shift is not limited to soybeans, either. China’s reliance on wheat, rice, and corn has been similarly growing.

China’s reliance on imported grain will only grow. In February, the Chinese regime relinquished its policy of being self-sufficient in grain production. This set the country’s grain output far short of what it consumes.

“A small increase in demand in China means huge exports for another country,” said Shefali Sharma, director of agricultural commodities and globalization at the Institute for Agriculture and Trade Policy.

“The implications are about land use and water use,” Sharma said, noting that the world should consider what it will take to fill China’s demand for grain.

Water needs of 50,000 families in California could be filled with what’s currently used in the United States to grow alfalfa for China, she said. In Brazil, meanwhile, the soy market for China caused massive deforestation.

China is the largest importer of U.S. food and agriculture products, and accounts for nearly 20 percent of exports, according to a recent report from the U.S. Department of Agriculture.

In 2013, China’s imports of food had already reached a six-year record high, accounting for $26.7 billion in soy products, wheat, corn, and forestry products. The report shows that since 2008, China has transformed from a major food exporter to a major food importer.

Sharma said the U.S. Grain Council estimates China will need to import anywhere from 19 million to 20 million metric tons of corn by 2022. She noted, “That’s about a third of the corn traded on the world market today.”

“The world market for grains is very volatile and insecure,” she said, noting that only about 12 percent of grains grown in the world are traded. “China really exemplifies this problem because China consumes so much of it.”

China is suffering from a major grain deficit, and this is being caused by several factors.

Facing significantly lower yields in grains, Chinese people are realizing the country is facing a long-term problem with food shortage.

The shift of focus from grain to meat is an artificial solution, since it is less impacted by environmental pollution. Farmers can simply feed animals with imported grain, while still producing food locally.

The new focus on importing grain means that, if the imports stop, China loses feed for the meat industry, and Chinese people are left without meat or grain.

Integrity then becomes key to maintaining businesses and keeping the imports flowing, yet problems are already coming up.

Some Chinese Communist Party officials have forcefully taken over farmland while claiming it was wasteland.

There are already reports of defaults by Chinese soybean importers who were unable to obtain letters of credit from Chinese banks.

It’s also not uncommon for Chinese buyers to scam the system. There are common cases of people importing large amounts of food, using the warehouse receipt as collateral to get cash from banks, then stashing it in other industries. This has driven up numbers on per capita grain possession in mainland China to greatly exceed the world average.