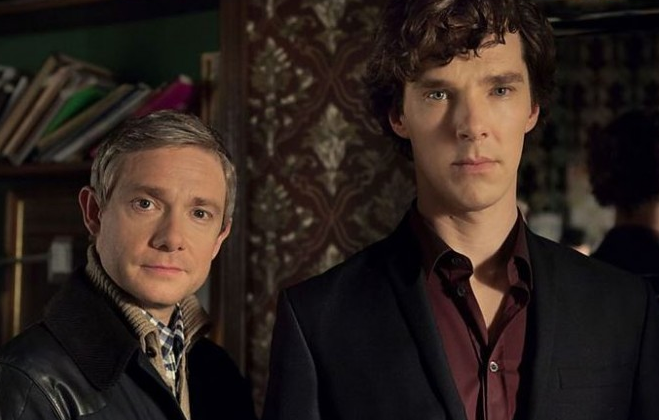 Sherlock season 4 has been officially confirmed, pleasing fans of the series.

The season will once again have three episodes–and there will be an additional one-off episode.

That special Christmas episode will likely air in 2015, according to star Martin Freeman.

A premiere date for season 4 has not been officially announced but it’s expected to be in 2016. Both Freeman and co-star Benedict Cumberbatch are notoriously busy.

Based off of that, it’s likely that season 4 will either premiere on January 1, 2016 or sometime in July or another summer month, perhaps June.

“Series Four! At last!” wrote co-creator and actor Mark Gatiss in an update.

“It’s always special to return to Sherlock but this time it’s even more special as we’re doing…a Special! Not only THAT, we’ll then be shooting three more episodes which will take Sherlock and John Watson into deeper and darker water than ever before…The whole ‘Sherlock’ team are terrifically excited to return for four new adventures. The Game is on — again!”

Added co-creator Steven Moffat: “A special, plus a new series of three episodes — it’s a record-breaking run! Of course, it’s far too early to say what’s coming, but we’re reasonably confident that the very next thing to happen to Sherlock and John, is the very last thing you’d expect ….”

BBC hasn’t released any plot spoilers but Metro made some speculation about what will happen.

Among the thoughts are whether Moriarty is actually alive or not, and what exactly happens with Mary. She and John marry in the books, but Gatiss and Moffat “have a habit of playing around with Conan Doyle’s canon,” Metro points out.

“But when it comes to major stories and events such as the confrontation at the Reichenbach Falls, A Study in Scarlet and The Hound of the Baskervilles, they have remained faithful to the original.”

Freeman has speculated himself that “at some point” Mary will “presumably die.”