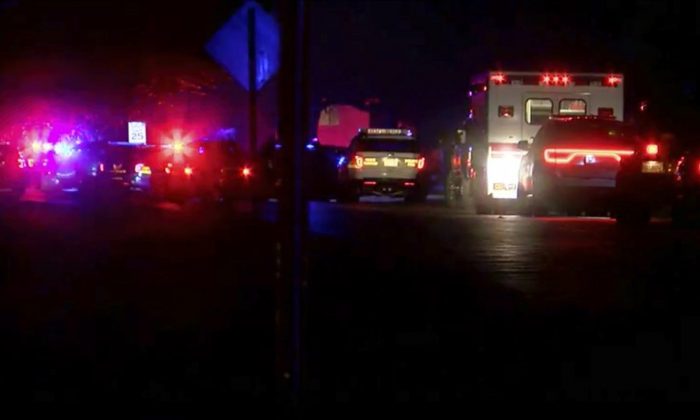 Lights illuminate police vehicles as authorities respond to a standoff at an apartment complex in Ohio, about 20 miles east of Cincinnati on Feb. 3, 2019. (FOX19Now.com via AP)
Crime and Incidents

An Ohio sheriff’s deputy has been killed and another injured during a standoff with a barricaded suspect at an apartment complex near Cincinnati, following a law enforcement response to what officials said was a “psychiatric call.”

The Clermont County Sheriff’s Office (CCSO) told a Sunday morning press conference that two deputies had been shot in a Feb. 2 standoff at the Royal Oak Apartments in Pierce Township, Fox19 reported, with one officer in the hospital with injuries and the other dead from a gunshot wound.

The deadly 11-hour standoff continued into Sunday, with the suspect “still firing rounds” at the scene, WCPO reported early Sunday.

Deputies used megaphones to call on the gunman to “come out with your hands up. We don’t want to hurt you,” according to the station.

In the early morning hours of Sunday, a WXIX-Fox19 reporter shared on Twitter a video from the scene, captioning it as eyewitness Troy Elder noted the suspect had surrendered.

“About 10 minutes ago he surrendered,” a voice presumed to be Elder’s can be heard on the video, adding, “I believe he set fire to his apartment, a bunch of ammunition was going off. The fire department was quick to put out the fire.”

Capt. Jeff Sellars of the CCSO told reporters that officers originally responded to a 911 call from a male who said there were people in his apartment that were refusing to leave. The person making the call also told officers that there were weapons inside his home. Sellars added that when police arrived at the location, they were unable to make contact with the person who had earlier called 911.

Lt. Julie Poe with Pierce Township police told WCPO that a suspect had barricaded himself inside his apartment shortly before 7 p.m.

The first shots were fired at about 8:15 p.m., captain Sellars said, with a multiagency special response team arriving shortly afterward and attempting to engage the subject in negotiation.

More shots were fired from inside the apartment at 10:37, Sellars said, and two deputies were struck by bullets reportedly fired by the suspect.

One deputy was killed and the other remains in stable condition at the University of Cincinnati Medical Center. The deputies have not been named.

BREAKING NOW: LISTEN TO THE GUNSHOTS FIRED a viewer sent us gunfire he recorded at the Royal Oak Apts in Pierce Township, Clermont County. Still a very active scene there right now. Heavy police presence. We have a crew at the scene. Stay tuned as we learn more. @FOX19 pic.twitter.com/XtU4WJVjzH

Police did not fire back at the suspect, Pierce Township police told the WCPO, but they did fire a flash-bang grenade just before midnight.

In the early morning hours of Sunday, reporters on the scene noted that the suspect had surrendered to the police. There were reports he had set his apartment on fire and ammunition was exploding.

Clermont County officials said they would provide an update at 10 a.m. on Sunday.

BREAKING: EXCLUSIVE pix Eyewitness Troy Elder says fire appears to be under control. He’s hearing suspect may have set his own apt/ammunition on fire. @FOX19 pic.twitter.com/Js0OkW4kOQ

Fallen In The Line of Duty

According to the Officer Down Memorial Page, the past year saw 150 officers lose their lives in the United States in the line of duty.

The largest number of law enforcement officers—53—died from gunfire. One of those deaths was deemed accidental, the remaining 52 were shot with intent to kill.

Automobile crashes claimed 25 officer lives in 2018, the second most common cause of death among law enforcement agents.

So far in 2019, the total line of duty deaths stands at 11, according to the website, which notes the most recent officer death to be that of Cpl. Shane Totty of the Baton Rouge Police Department in Louisiana, who reportedly died in a motorcycle crash.

The as yet unnamed Ohio officer killed Saturday in the line of duty would bring that total up to 12.