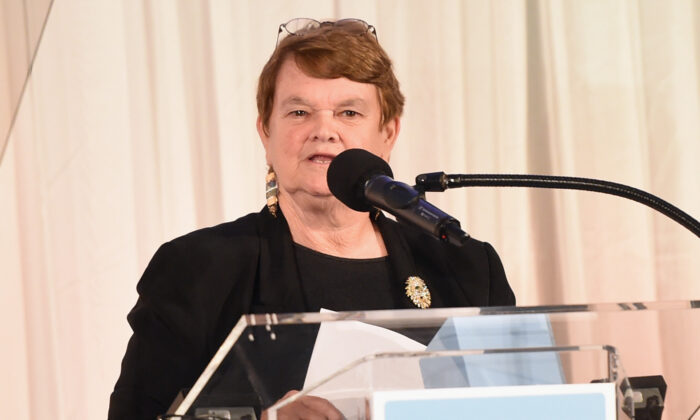 The home of Los Angeles County Supervisor Sheila Kuehl was searched the morning of Sept. 14 by the sheriff’s department as part of a public corruption investigation.

Kuehl, elected in 2018 to represent District 3, was escorted out of her home around 7 a.m. by the Los Angeles Sheriff’s Department (LASD). The supervisor was accused of aiding nonprofit Peace Over Violence in winning contracts—totaling over $890,000 between 2014 and 2020—with LA Metro to operate a hotline for reporting sexual harassment on its trains and buses.

Officers could be seen entering her home, going into different rooms, and taking photos and videos.

The affidavit that led to the warrant describes the case as a probe into “an allegation of criminal conduct” by Kuehl. It details the long history of friendship between Kuehl and Patricia “Patti” Giggans, who runs Peace Over Violence, noting that Kuehl officiated Giggans’s wedding in 2004 when she was a state senator.

It also noted that Kuehl—who serves on the Metro Board of Directors—is a member of the advisory board of Peace Over Violence and that she appointed Giggans to the Los Angeles County Civilian Oversight Commission.

According to the affidavit, a witness claims former LA Metro CEO Phillip Washington pushed forward the contract to the nonprofit “to remain ‘in good graces’ with [Kuehl].” The witness also claimed she pointed out billing irregularities involving the nonprofit to the CEO, who ordered her to pay the bills because he did not want to “upset any of Supervisor Sheila Kuehl’s friends.”

Detectives from the LASD’s Public Corruption Unit also served search warrants at the home of Giggans and at the Peace Over Violence headquarters.

In addition, the public corruption unit served search warrants at the county Hall of Administration and LA Metro Headquarters.

Kuehl told reporters outside of her home Sept. 14 the search was a “bogus non-investigation.”

She also said in a statement released in the late afternoon of Sept. 14 she had no involvement in the awarding of the contract to the non-profit. She also said the search of her home was “questionable and will be investigated.”

“This morning’s storming of my home by deputies with bulletproof vests and tactical gear was an effort to harass, intimidate and retaliate against a public figure who has been an outspoken critic of LA County Sheriff Alex Villanueva,” she said.

Kuehl and the county Civilian Oversight Commission have a history of clashing with Villanueva and have repeatedly called for his resignation over alleged deputy gangs within the sheriff’s department.

Villanueva has called the board’s allegations against him a political act to stifle his reelection campaign. He is running in November against former Long Beach Police Chief Robert Luna.

The search warrant affidavit notes that Villanueva recused himself from any involvement in the investigation to avoid any appearance of conflict.

However, Villanueva on Sept. 14 sent a letter to the state Attorney General’s Office requesting that it investigate a statement made by Kuehl following the raid, indicating a county attorney had contacted her the night before and informed her of the impending sheriff’s department search.

Villanueva suggested in the letter that county Inspector General Max Huntsman and the county counsel’s office had interfered with a criminal investigation by notifying Kuehl of the search, calling it a potential felony offense.

“The illegal acts committed by Mr. Huntsman and county counsel have potentially compromised the integrity of this criminal investigation including, but not limited to, the concealment or destruction of evidence,” the sheriff wrote.

Peace Over Violence did not immediately respond to a request for comment. The sheriff’s department didn’t comment on the search warrants.