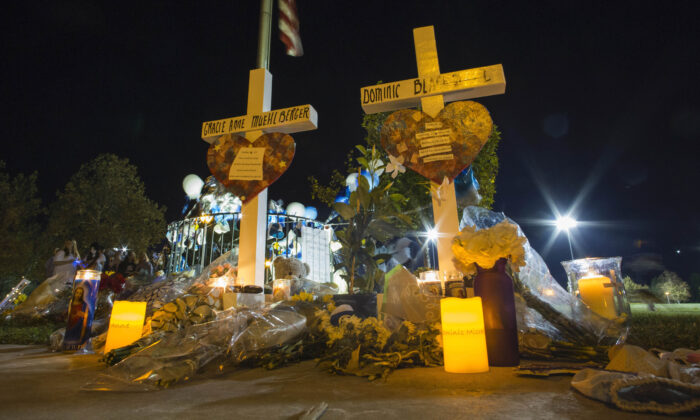 The 1911-model pistol has a partially built receiver and is described as a “ghost gun,” meaning it was not registered and has no serial number.

When police searched the home of alleged gunman Nathaniel Tennosuke Berhow, they discovered another kit gun, the sheriff said.

“The weapon used in the homicide was also a kit gun. It was assembled from parts. It had no serial number, so it becomes what is known as a ghost gun,” Villanueva told local KABC-TV. “They’re sold at gun shows, for example. You can buy them online. They’re also known as an ’80-percent gun,’ so 80 percent of it assembled already and you get the additional 20 percent. They’re sold as a kit. You can legally buy it, assemble the weapon yourself and then you have a gun that is not registered and no one knows that you have it, and that is very dangerous.”

Sheriff’s homicide detectives have not determined who assembled the gun and are still working on a motive for why—on his sixteenth birthday—Berhow shot five of his classmates and then turned the gun on himself. Two of the victims died soon after, and Berhow also died in the hospital the next day.

“We’ve interviewed over 45 people. We’ve gone through all of the hard evidence we have on the ground — at the residence, at the school,” he told ABC7.

“We know the mechanism of ‘how’ but the ‘why’ still remains an elusive goal.”

Contrary to earlier reports, six guns registered to the boy’s late father were not found at the home after the shooting but were lawfully removed prior to the attack and had been legally destroyed, Villanueva said.

It is not clear whether the boy or his father, an avid hunter who died two years ago, had assembled the kit guns.

“The information, unfortunately, is available on YouTube, and that is one of the challenges for law enforcement today because Congress and state legislatures enact all these [laws] about gun registration but now the gun industry is creating a way to just bypass the entire thing by creating a mechanism to manufacture weapons yourself,” said Villanueva to the media outlet.

While police haven’t uncovered a manifesto or diary that would spell out the motive behind the shooting, Villanueva said they are working with federal entities to unlock the suspect’s cell phone.

However, police reported earlier that a social media post, possibly made by Berhow, stated: “Saugus have fun at school tomorrow.”

Villanueva said last week the shooting was pre-meditated. However, evidence suggests that Berhow’s mother had no knowledge of what her son was planning the day of the attack, the sheriff said.

“The suspect’s mother packed corn dogs, grapes and homemade cookies into the backpack of the suspect, so that kind of gives you an idea that even the mother apparently was unaware of what was going to transpire just moments later after she let her son off at the school, but the ‘why’ is still a mystery to this date,” Villanueva said.

Gracie Anne Muehlberger, 15, and Dominic Blackwell, 14 were killed in the shooting. Three other students were treated for injuries and released from area hospitals last week.

Classes at Saugus High School have been cancelled until Dec. 2, but students were allowed to return to the school on Tuesday to pick up their belongings that were left behind at the time of the shooting.

Santa Clarita is located about 30 miles northwest of downtown Los Angeles, and is the third largest city in L.A. County with about 294,000 residents.

According to the Criminal Defense Lawyer website, gun buyers trying to avoid a background check and gun registration process “can instead buy an unfinished receiver (also called an 80%, blank, or partial receiver) to make a “ghost gun” (so called because it cannot be traced). An unfinished receiver is a partially completed receiver that requires additional tooling to be completed. This kind of receiver is not technically a firearm and falls outside the regulatory scope of the GCA [Gun Control Act] (and so does not bear a serial number). Unfinished receivers are legal to sell and distribute and are widely available online and at gun shows. Because ghost guns are untraceable, it is impossible to know how many of these firearms have been assembled, sold, or used in violent crimes.”

Meanwhile, a student who took a gun to school was arrested last week in Lancaster, Calif., Villanueva said.

“It turned out he was a self-admitted gang member and he was carrying the weapon for protection against other gang members,” he said.