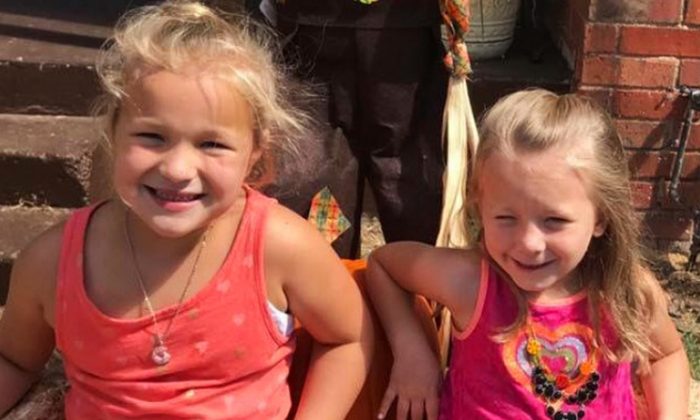 KayLee Danielle and Kenlie Henderson, ages 7 and 5, respectively, were shot in the head by their mother, Sarah Henderson, on Nov. 2. (GoFundMe)
Crime and Incidents

The Sheriff’s Office of Henderson County, Texas, has released 911 tapes, which shed light on the incident where a local woman shot and killed her two daughters.

Sarah Nicole Henderson is charged with killing her two girls, 7-year-old KayLee Danielle, and Kenlie, 5, at their home in Mabank, Texas, on Nov. 2.

According to Henderson County Sheriff Botie Hillhouse, Henderson confessed to the crime during an interview with investigators.

Investigators now believe that the 29-year-old mother of three planned the murders in advance.

“Over the last 24 hours, the investigation shows that she planned these murders for at least the last two weeks,” Sheriff Hillhouse said. “It appears she also intended to kill her husband, but the entire crime did not go as planned.”

Henderson’s third child does not live in the same home and was not involved in the incident.

Henderson’s husband called 911 three times on the night of the incident. He made the first call at 11:29 p.m. on Nov. 1, reporting a suicidal woman and requesting assistance. The Emergency Medical Service dispatcher called the Sheriff’s Office asking them to investigate.

Henderson’s husband called back seven minutes later saying there was no problem and no one needed help.

Sheriff’s deputies had already been dispatched. They reached the Henderson residence at 11:45 p.m. The Hendersons met the deputies at the door and told them everything was fine and no one was in danger.

At 2:24 a.m. on Nov. 2 Henderson’s husband called 911 again, this time reporting that a woman had shot her children.

I wonder if I could get somebody out here to check my wife out,” he said. “My wife, she’s like, I don’t know, like, something’s going on with her.”

“Can you describe what’s going on, the symptoms?”, the operator asks.

“Like she’s freaking out like someone’s out to get her. She won’t listen to me, she won’t talk to me.”

In the background Sarah Henderson can be heard telling her husband she was good, she was okay.

In response to questions, Henderson’s husband tells the 911 operator that his wife is alert she was just in a “different state of mind.”

Henderson’s husband spoke with a different 911 operator seven minutes later and said he wanted his call “disregarded,” because “She’s fine now,” referring to his wife.

When Henderson’s husband calls back the third time, he reported the murders and said his wife is suicidal.

“My wife, my wife just shot our kids,” he told the operator, crying. Sarah Henderson can be heard in the background crying, ”What have I done?” and “Sorry, girls … God forgive me, please.”

Her husband told the operator, “She was asleep when I went to sleep last night and I woke up and she comes in there and says, ‘Babe, I just shot the kids’ and I didn’t want to believe it. And I went in there and they were dead.”

In the background Sarah Henderson can be heard crying and imploring her husband, “Please, just shoot me.”

Sarah Henderson apparently did not have a history of mental illness or Octcriminal behavior. Police were called to her home in 2015 to investigate a report of excessively loud voices. Child Protective Services had not been had a case on Henderson since 2010.

Jaylyne Palmer, who lives across the street from the Henderson family, said, “Those little girls were so adorable. They would come over here on their little bicycles.”

She said that although she had heard Henderson shouting loudly at her children, she had seen no signs of violence.

She said the news of their murder was difficult to grasp.

“It’s very upsetting,” Palmer said. “I’ve never had anything tragic like that happen so close to us,” [her and her husband].

Henderson is being held at Henderson County Jail on one count of capital murder. Sheriff Hillhouse said another capital murder charge is pending. Bail is set at $2 million.

Henderson is on around-the-clock suicide watch.