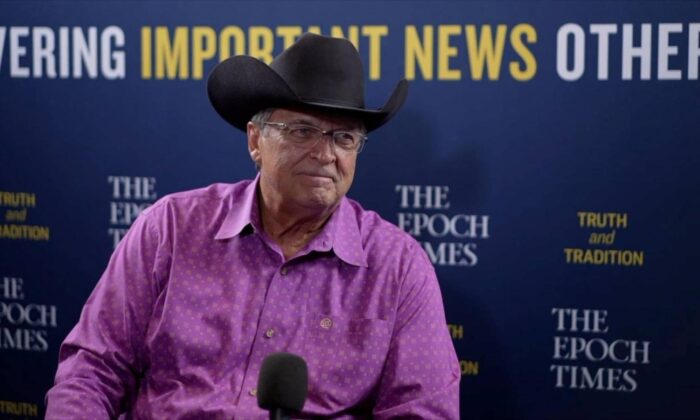 Richard Mack, former sheriff of Graham County, Ariz., and founder of the Constitutional Sheriffs and Peace Officers Association (CSPOA), in an interview with The Epoch Times in July 2022. (Crossroads/Screenshot via The Epoch Times).
Election Integrity

The claim made by Dinesh D’Souza’s documentary “2000 Mules” that significant fraud occurred in the 2020 election should be independently investigated by sheriffs in their counties, said former Arizona sheriff Richard Mack.

The first step of any investigation into this allegation is watching the movie, said Mack, founder of the Constitutional Sheriffs and Peace Officers Association (CSPOA).

“The ‘2000 Mules’ movie finally got us totally on board this issue. And it is our number-one issue now,” Mack said.

“Every sheriff in the country should be watching that movie,” Mack told EpochTV’s “Crossroads” program.

However, the evidence presented in “2000 Mules” by two researchers, Catherine Engelbrecht, the founder of the nonpartisan election integrity watchdog True the Vote (TTV), and Gregg Philipps, a cyber investigator for TTV, has been discredited by major media, Mack noted.

Mack advises investigating the reported evidence first. If the report is false, those who produced it should be arrested, Mack said.

“We need the sheriffs to investigate this so badly because the federal government won’t do it.”

Mack said that the federal agencies which should investigate the alleged election fraud are not independent, and they follow orders. “[The] sheriff is independent. He doesn’t have to ask anybody permission to do this investigation.”

Mack encourages people to watch the movie “2000 Mules,” then have their sheriff watch it and ask the sheriff to conduct an investigation.

Also, if people witnessed that election fraud has taken place in their county, they should notify their sheriff, Mack said. “You should have a relationship with your sheriff. Go volunteer to help your sheriff out. Ask the sheriff to form a posse.“

In Arizona, the law stipulates that “the sheriff can call out every able-bodied citizen to help him enforce the law or keep the peace,” he added.

“Show me the evidence,” Mack said. “And there wasn’t one single investigation done, except now by county sheriffs across the country.” There are currently six sheriffs investigating alleged claims of election fraud, Mack added.

Wilmot’s team, in cooperation with the county recorder’s office, identified in May a pattern of fraudulent voter registration in the 2020 election leading up to the 2022 primary election, according to a statement.

Falsifying voter registration done by “outreach groups who are paid for each registration form they submit” is one form of voter fraud discovered by the sheriff’s team, the statement said.

Other fraud patterns identified during the investigation include people voting in multiple locations in the same election, fraudulent voting in the name of legitimate voters, and voting for someone deceased or those who moved away, according to the statement.

There also were cases of requesting absentee ballots on behalf of voters and voting without their knowledge, as well as “obtaining the absentee ballot from a voter and either filling it in directly forging the voter’s signature or illegally telling the voter who to vote for,” the statement said.

“We have an obligation to the people we serve to investigate every reasonable complaint we receive until we reach a successful conclusion,” Hayden said, according to CSPOA’s website.

In Wisconsin, Sheriff Chris Schmaling and investigative officer Lt. Michael Luell believe that the election laws were broken in their county, the website said. “We’re not trying to change one election. We’re trying to hold the government accountable,” Luell said, according to the website.

Mack believes that swearing allegiance to the U.S. Constitution while taking the oath of office obligates sheriffs to uphold and defend the Constitution. During Mack’s tenure as a sheriff of Graham County, Arizona, he challenged the constitutionality of the Brady Law, a gun control federal bill that imposed on sheriffs a requirement to run background checks at their expense.

He considered the legislation a government overreach that “commandeers the office of sheriff for federal bidding,” and filed a lawsuit to counter it.

Mack, joined by six other sheriffs, won the lawsuit against the federal government headed at that time by President Bill Clinton, after the three-year legal battle fought all the way to the U.S. Supreme Court.

The Supreme Court‘s landmark decision was delivered by Justice Antonin Scalia, who wrote in the majority opinion: “The Federal Government may neither issue directives requiring the States to address particular problems, nor command the States’ officers, or those of their political subdivisions, to administer or enforce a federal regulatory program.”

“Such commands are fundamentally incompatible with our constitutional system of dual sovereignty,” Scalia continued.

Separation of Federal and State Governments

Mack lauded Scalia’s opinion about the separation of the federal government and state governments and recommended reading it.

“The Framers rejected the concept of a central government that would act upon and through the States, and instead designed a system in which the state and federal governments would exercise concurrent authority over the people,” Scalia wrote.

“This separation of the two spheres is one of the Constitution’s structural protections of liberty.”

Scalia explained it further, quoting James Madison, a Founding Father of the United States, “’In the compound republic of America, the power surrendered by the people is first divided between two distinct governments. … Hence a double security arises to the rights of the people. The different governments will control each other, at the same time that each will be controlled by itself.”

“The whole purpose of the Constitution was to limit government,” Mack said, stressing the importance of the 10th Amendment.

The 10th Amendment stipulates: “The powers not delegated to the United States by the Constitution, nor prohibited by it to the States, are reserved to the States respectively, or to the people.”

Therefore, people should encourage their sheriffs to watch the film “2000 Mules” or even watch it with them and then ask them to investigate the fraud claims shown in the documentary, Mack advised.

Sheriffs are independent and do not need to ask anybody for permission to do this investigation, Mack said. “And every one of them should start it right now.”

He also urges people to develop relationships with their sheriffs. “The county sheriff—America’s last hope,” Mack said, quoting the title of the book he wrote 10 years ago.