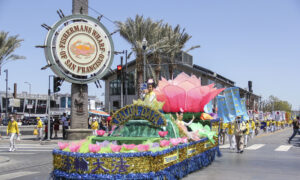 A Missouri sheriff is firing back at a newspaper columnist who wanted to see what it was like when “minority motorists” are pulled over by police, claiming he was lucky he didn’t “get shot” during a traffic stop.

Boone County Sheriff Dwayne Carey released a video after a June 30 column from Columbia Daily Tribune writer Bill Clark, who was stopped by an officer earlier in the month over a turn signal error.

In the column, Clark claimed that he may have been pulled over due to his “liberal bumper stickers,” the New York Post reported.

“I’m lucky I didn’t get shot,” Clark, who is 84 years old and white, then opined. “Sirens wailed and when I stopped, two officers were out of the sheriff’s vehicle. When I reached over to turn off the radio and then take my wallet out of my pocket to produce the driver’s license and insurance card, I realized my hands were not at the top of my steering wheel. Danger lurked and official arrogance was to follow.”

“When you are in the shoes of the minority, you learn a lot more about their journey,” Clark wrote, adding that his life “seemed to be in danger.”

Sheriff Carey said that a review of the officer’s dashcam footage painted a very different picture. Carey decided to released the 11-minute video.

“In his column he indicates, ‘I’m lucky I didn’t get shot,'” Carey wrote. “There is never a weapon drawn, the deputies don’t take a position of cover, there are no loud verbal commands, no panic or anything else for that matter by the deputies. Would you agree this is sensationalism at its best? I say yes!”

“I kept waiting for the ‘official arrogance’ that Ol’ Clark wrote about, but I only observed a professional young deputy do exactly what I expect her to do; her job in a manner consistent to our motto,” Carey continued. “The field training deputy is on the passenger side of Ol’ Clark’s vehicle listening to the interaction, which is common for a two person unit and especially for a deputy in training.”

Carey added that Clark became confrontational and raised his voice.

“The deputy finishes her contact by telling Ol’ Clark to drive safely and she then thanks him,” Carey added in a sardonic tone. “The nerve of law enforcement these days! Both deputies walk back to the patrol vehicle and again no inappropriate conversation, no derogatory comments about Ol’ Clark, no laughing or joking, just professional conduct.”

The Columbia Daily Tribune posted a separate editorial, with its managing editor, Charles Westmoreland, saying that he “cannot defend Clark’s column or the facts as he presented them.”

“In the video I saw two professional deputies performing their job by the book, and a somewhat confused and irritated motorist, unaware of what he had done to draw the attention of local law enforcement,” he said.

When meeting with Clark today, he acknowledged he’d made a mistake in taking out his frustrations in his column, and for blowing certain aspects out of proportion. He’s not apologetic for how he felt at the time or the way he perceived certain things. He intends to write an apology that will publish in Saturday’s print edition. Clark came to the decision on his own, and I’m thankful he did. Everyone makes mistakes in this life, but too few own up to them.

I can’t unpublish Clark’s column, but I will rebuke it. I personally don’t believe Clark was threatened by the deputies in any way, but I wasn’t inside his head and can’t say he didn’t feel threatened. I saw a deputy standing behind the car with his hands on his hips. Clark saw a deputy in his rearview mirror with his right hand next to his firearm. Perspectives differ from one person to the next. The dash cam video (and those of us who watched it) clearly had the better view.

He said that Clark will be suspended indefinitely for the incident.