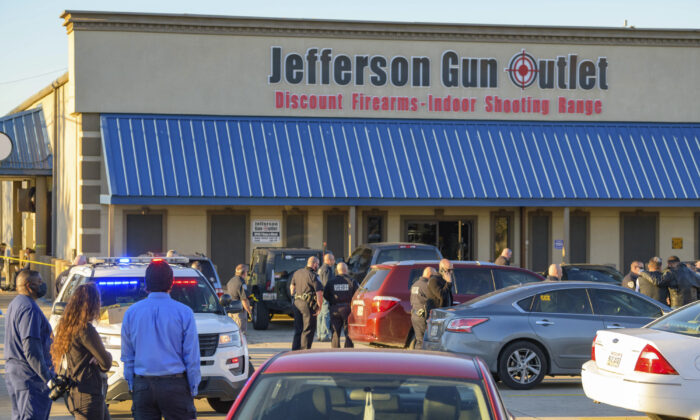 Bystanders react at the scene of a multiple fatality shooting at the Jefferson Gun Outlet in Metairie, La., on Feb. 20, 2021. (AP Photo/Matthew Hinton)
Crime and Incidents

Several armed bystanders successfully stopped a shooting spree that left three dead, including the suspect, in a New Orleans suburb.

The shooting happened at the Jefferson Gun Outlet in the suburb of Metairie, Louisiana, around 2:50 p.m., according to a release from the Jefferson Parish Sheriff’s Office.

Sheriff Joseph Lopinto told reporters that a person went into the gun store and shooting range and fatally shot two people on Saturday. Several individuals engaged with the shooter inside the gun shop and in a parking lot outside.

Three people died on the scene, including the shooter. Two others were transported to a local hospital for treatment.

The authorities said the two hospitalized are in stable condition.

It’s unclear if the good Samaritans are employees of the gun shop or customers.

Guns and ammunition are sold in the front of the outlet that faces the main thoroughfare through Jefferson Parish. Customers who want to frequent the gun range generally go around to the side entrance of the building. Staff who work there often wear a sidearm.

Lopinto said investigators are just beginning to piece together what happened.

“We’re trying to put it all together, piece it together with what we have in this development scene,” the sheriff said.

None of the dead or wounded were immediately identified. Lopinto said the investigation is ongoing as authorities.

Caution tape surrounded the business to keep onlookers away from the crime scene where ambulances and numerous law enforcement vehicles had arrived earlier. A neighboring Taco Bell was evacuated.

Metairie is a major suburb of New Orleans, about five miles west of the city’s iconic French Quarter, in neighboring Jefferson Parish.