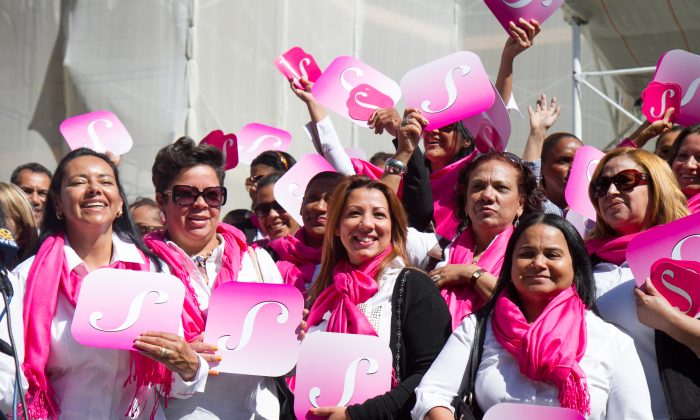 Female SheRides drivers show their support in at a press event for She Rides at City Hall in New York City, on Sept. 15, 2014. (Benjamin Chasteen/Epoch Times)
New York

NEW YORK—At five in the morning after working a shift as a bartender, Francina Tejada walks twenty blocks to the 7 train in Queens, takes the train to Midtown Manhattan, then transfers lines to get to her apartment in Upper Manhattan. By the time she gets home, it’s almost eight. A few hours later, it’s on to her other job at NewYork-Presbyterian Hospital.

“It’s awful in the winter,” Tejada said. In January, it snowed, and she had no choice but to call car services, where she endured comments and looks that made her uncomfortable and fearful for her safety. Her bartender uniform is black and form-fitting, and the requirements are to match the image of the club—fishnets, heavy makeup—”provocative,” Tejada said. “And then people get all sorts of ideas about you. They don’t understand this is my job.”

“I started taking the subway,” Tejada said. “It’s not as bad because it’s in public and there are other people, and I can yell, if something happens.”

Tejada, who heard of the app SheRides through a friend of a friend, is one of the many women waiting for the all-female car service to launch.

“I would feel safer with a woman—she’s a daughter too, she knows how it feels,” Tejada said.

Over the past week, seeing an outpour of emails, calls, walk-ins, and surveying, spokesperson Tamika Mallory said the demand for SheRides has exceeded expectations tenfold. Originally scheduled to launch Tuesday with 50 drivers, the company is holding off until 500 drivers have been recruited.

“I never anticipated this level of support, from both the men and the women,” said Stella Mateo, founder of the SheRides car service in front of City Hall Monday, surrounded by women livery car drivers in hot pink scarves.

it’s sad that this is necessary but i think this is a gerat idea RT: SheTaxis is like Uber for women only http://t.co/yTneAzrNGy #Business — Laura Osterndorf (@LauraOsterndorf) September 15, 2014

Cooool but my thought: wow, this world has gotten so bad where women constantly have to protect ourselves from men. http://t.co/gtqgTDQm7H — amelia suenna (@thatkindofplace) September 14, 2014

“This project is my baby, and I’ve been anxious [to launch],” Mateo added. But she realized most of the passenger requests would go unfulfilled unless she recruited more drivers.

As of Monday, there were about 100 female drivers participating, from over 15 bases affiliated with SheRides.

“I think this is a great idea. It’s amazing that nobody took a look at this issue before,” said Avik Kabessa, CEO of Carmel Car Service, which has 13 female drivers affiliated with its bases participating in SheRides.

Women make up about 2 percent of all for-hire and taxi drivers in New York City, while women passengers account for 60 percent of the 600,000 daily rides.

In addition to recruiting licensed drivers, SheRides is providing services to help women get a license.

SheRides seeks to empower women, Mallory said, adding it is part of the movement fighting for social, racial, and gender equality.

There is no pay gap in the livery industry, where drivers are essentially small business owners. Some drivers at the press conference said that, for women over 50 especially, it gave them a great path into working for themselves in an economy where they cannot find employment elsewhere.

Stella Mateo’s husband, Fernando Mateo, founder of the New York State Federation of Taxi Drivers, said this should not be seen as competition, and in fact many of his male drivers have been happy to take this news home to their wives, asking them to join.

While bases have not been turning women drivers away, Mateo said, they have seen so many of their husbands robbed, shot, or injured, and fear has been a large barrier to entry for female drivers.

“This gives them an opportunity to work with other women and feel safe,” Mateo said.

Council member Ydanis Rodriguez commended the service, referencing his two daughters who would want the option.

“I have no doubt this program will not only succeed, but bring a previously unknown sense of safety in a time of increasing violence towards women,” Rodriguez said.

Over the past few weeks, three women were attacked in two unrelated hate crimes.

Andrew Celli, attorney for SheRides, said there were no legal issues with the service and discrimination would not be an issue.

“The court treats gender very differently [from race],” Celli explained. In the context of the current livery industry, he said, SheRides would not be seen as a discriminatory service as it is a “pro-civil rights position in this case.”

“We are not excluding anyone,” spokesperson Mallory said. “Yes, men will be able to use our app, but the idea is women-oriented.”

Mallory would not disclose whether male passengers’ requests would be rerouted to other car services or drivers, as earlier reports indicated. She said the company would disclose how the app functions closer to the launch date, which is undetermined, because it will be based on when they can find enough drivers.

The Westchester launch date will be held off as well, until the service launches in New York City. The company (under the name SheTaxi) has plans to expand nationally.