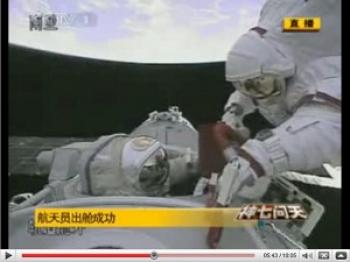 NASA image of the earth taken from space on July 2006. In this video snapshot, the atmosphere can be clearly seen.
China

CCTV ran a live broadcast of the Shenzhou VII spacecraft launch to mark the second phase of the Chinese Communist Party (CCP)’s Project 921 at the end of September. This video footage, however, contains many unexplainable physical phenomena. These anomalies from the broadcast, which include bubbles in space, no evidence of the earth’s atmosphere, and the lack of background noise usually hear in space communication, call into question the legitimacy of the mission itself. Upon analyzing this footage, some even suspect the live broadcast was a fraud that employed an analogue video taken under water to simulate conditions in space.

Reporter: Dr. Qu Zheng, there have been concerns raised about the live broadcast of the CCP Shenzhou VII Spacecraft launch? What’s your view on this?

Qu Zheng: I have seen it all. My research is related to the launch of this spacecraft so I have been watching it very closely. In addition, since I am Chinese, anything happening in China—especially things related to my field of research—grabs even more of my attention.

Personally, although I know the CCP regime has a history of fraudulent activity, where they often do things for political gain, when I saw these discrepancies, I didn’t want to believe them—I wanted the live broadcast to be true. If this video which was broadcasted to the whole world is a fraud, not only will this make the Chinese people lose face in front of the whole world, I will personally not be able to hold my head up in front of my colleagues.

Unfortunately, when I watched the live broadcast provided by CCTV, I was shocked. Although not all of the doubts raised by the people on the blogs are legitimate, many of them are indeed very accurate. The problems in the video all involve simple physics, so it doesn’t require a very high level of professional insight to see what is going on.

Besides, from my own observation and analysis, I have found even more discrepancies. They incontestably confirm that this so-called live broadcasting never took place in space.

Reporter: What are your suspicions? Can you give us a detail explanation?

Qu Zheng: Of course. In addition to the air bubble problem pointed out by bloggers, they also includes technical pre-launch concerns, a lack of atmosphere around the Earth, abrupt large scale changes in the clouds, and no background noise heard in the space-talk.

Advanced Launching of the Shenzhou VII

Reporter: Some Internet users question the advanced launching that you just mentioned.  Could you please talk about it from a technical point of view?

Qu Zheng: The proper launch time for a spaceship is called the launch window, which may last several days, several hours, or even minutes in some cases, and is generally predicted by computer simulations. The factors that decide the launch window include the sunlight angle, which affects the solar panel of the spaceship; the solar radiation, which affects the infrared sensor of the control system; and the temperature and shape of the spaceship.

Aerospace testing is complex system engineering. Once the launch window is determined, it cannot be casually changed without very special considerations. Oftentimes, delaying the launch time is due to technical or weather reasons. Advanced launching is very rare as it means disrupting the scheduled plan. The certainty of success will decrease. The launching of Shenzhou VII is an exploration test for the Chinese Communist Party (CCP). No one has 100 percent certainty of success and the best launch window has to be selected.

Early on the CCP media reported that mid-October would offer the best launch window. Even the PLA’s General Equipment Department refuted the rumor of an advanced launch. However, the CCP suddenly announced on September 6 that the spaceship would be launched at a pre-set time at the end of September, as it was “a very good launching window.”  Regarding this advanced launch, the Xinhua New Agency said:

“According to some aerospace experts, there is a proper launch window both in September and October. But the sunlight angle in September is better for spacewalk. This is the main reason for the advanced launch.”

This was playing a word game. In September the sunlight angle is a little bit different from in October. However, the computation of the solar position is not difficult and can be done even a year in advance. It is not necessary to wait until September 6 to know that launching at the end of September is better for spacewalk! It’s obvious that there were other reasons behind moving the launch to an earlier date.

One possible reason was political. If the advanced launch was a political order, then using video recording as direct seeding was possible, to guarantee a complete success.

Video Discrepancy 1: Why Was There No Atmosphere Around the Earth in the Video?

Reporter: Among the discrepancies you raised about the live broadcast, one was the lack of an atmosphere around the earth. Please elaborate.

Qu Zheng: Please take a look at this video:

It was shot by NASA’s space shuttle Discovery STS-121 on July 2006 during a mission at the International Space Station (ISS). When the shuttle observes the earth following the tangential direction, i.e., the spherical edge of the earth, we can see that there is a soft circle of blue around the earth, making the edge of the earth image a bit blurry.

This is the atmosphere of the earth. This blue circle becomes even more apparent when there are clouds over the earth. The appearance of this blue is due to the same reason behind why we see the sky as blue—air molecules scatter blue light more strongly. Because air molecules are mainly concentrated within 15 kilometers of the earth’s surface, and given the earth’s radius of 6,370 kilometers, at this distance it just becomes a thin layer.