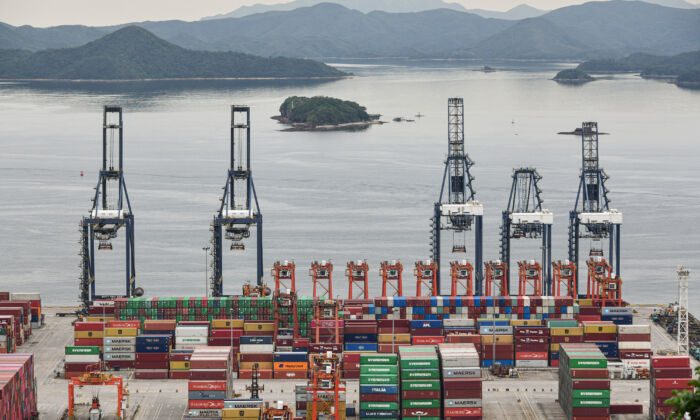 Cargo containers are stacked at Yantian port in Shenzhen in China's Guangdong Province, on June 22, 2021. (STR/AFP via Getty Images)
China

On March 21, Shenzhen, which was under lockdown, announced temporary lifting of the lockdown, restoring order to production and daily life for a week. However, Shenzhen’s Yantian port soon became even more congested, adding to the bottlenecks in the global supply chain caused by the pandemic and the war between Russia and Ukraine.

On March 20, the Shenzhen COVID-19 Prevention and Control Command reported that from March 21 to 27, Shenzhen’s public transport and underground services would resume full operation, and government agencies and enterprises would resume normal work and production operations.

CNBC business analyst Lori Ann LaRocco said that although the Yantian port did not close during the lockdown, the cargo business has been shut down because the port not only needs to accept ships to port, but also needs people to drive trucks and transfer goods out of the warehouse—no labor means no trade.

Shipping giant Maersk estimated last week that the Chinese Communist Party’s COVID-19 test requirements for truck drivers along with stricter road controls between Shenzhen and nearby cities mean trucking services in the region could be seriously affected by 40 percent.

An employee of an electronics factory in Shenzhen told The Epoch Times on March 22 that after a week of city closures, Shenzhen has been devastated and logistics and production have been greatly affected, with his company not even paying wages. The staff in the WeChat group chat asked the boss “when to pay wages,” the boss was afraid to respond.

Stephanie Loomis, Vice President of International Procurement for freight forwarder CargoTrans, said the impact of the China outbreak lockdown on the global supply chain could be similar to the damage caused by the Suez Canal blockage last year.

Poor Logistics Will Exacerbate US Inflation

UCLA Anderson School of Management economist Professor Richard Yu told The Epoch Times that countries that need to import goods from China, especially the United States, are affected by the Shenzhen city closure.

He told The Epoch Times, “At the moment, Shenzhen has announced a temporary lifting of the closure for one week. If the city is locked down again due to the severity of the pandemic, it will create more uncertainty. These lifting restrictions and re-lockdowns would have very serious consequences for businesses and the global supply chain. A shortage of goods that need to be imported from China would exacerbate the most serious problem facing the U.S. today—inflation.”

Last June, the Yantian port in Shenzhen was closed for nearly a month due to the pandemic, causing a backlog of tens of thousands of sea containers and causing many ships to wait outside the port for weeks, worsening the global supply chain problem.

Congestion at Western US Ports Worsens

The Chinese New Year holiday in February and city closures in Shenzhen and elsewhere this March gave western U.S. ports more time to breathe, with the busiest ports of Los Angeles and Long Beach finally getting a chance to handle their previously backlogged cargo.

According to the Marine Exchange of Southern California (MESC), only 48 vessels called at the two ports on March 17, well below the record 109 vessels in early January.

However, Noel Hacegaba, deputy executive director of the Port of Long Beach, told Bloomberg on March 15 that the impact of the Shenzhen lockdown would affect the Los Angeles maritime hub.

In an interview with The Wall Street Journal on March 19, Gene Seroka, executive director of the Port of Los Angeles, predicted an influx of ships in the coming weeks.

A spokesman for the Port of Los Angeles said it is estimated that about 20 percent of the cargo coming into the U.S.’s busiest container terminal will come from Shenzhen.

On the afternoon of March 22, local time, the number of vessels calling at the Port of Los Angeles and Long Beach had increased to 193.

According to Professor Yu, the Chinese Communist Party’s “zeroing out zero tolerance” policy is the most severe and worst pandemic prevention policy, which will have more negative impacts not only on China but also on Western economies. He believes that the CCP should review the “zeroing out” policy.

In addition, he believes that the CCP’s “Zero-COVID” policy will accelerate the global shift away from or reduce dependence on China’s manufacturing sector. In fact, he said that “this trend has been happening since the outbreak of the pandemic, if the Chinese Communist Party adopts a more stringent ‘Zero-COVID’ policy, it will accelerate this global resistance.”