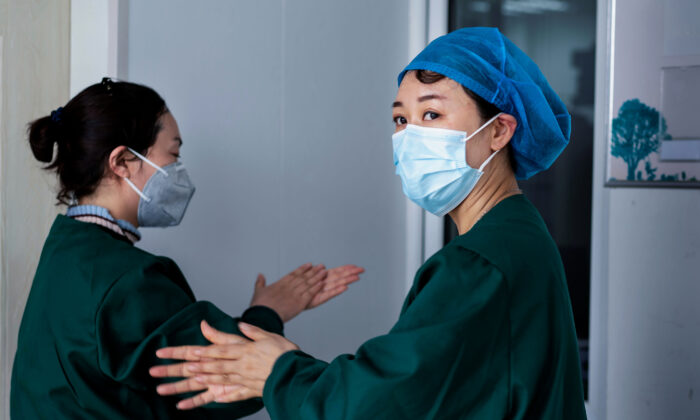 Shenzhen Village Under Lockdown Due to New COVID-19 Cases

On Dec. 1, the Shenzhen Health Commission announced a positive COVID-19 case, a 60-year-old Hong Kong truck driver surnamed Chen, who travels between his home city and Shenzhen every day. Chen had close contact with 33 locals, according to a notice issued by authorities.

The following evening, one of Chen’s contacts surnamed Yang, a 54-year-old male, was announced to be an asymptomatic virus carrier, who lives in Sungang village, Luohu district, according to Luohu health authorities. The Chinese regime counts in a separate category those who test positive for COVID-19 but do not exhibit symptoms. Two of Yang’s family members tested negative.

Very soon, an emergency lockdown was declared in the village.

Chinese authorities have routinely underreported COVID-19 cases in order to downplay the severity of the pandemic crisis; it remains unclear the true scale of China’s outbreak.

Residents said their village is home to a large population of commuters who work in the Luohu and Futian districts, two of the most important commercial centers in Shenzhen.

Some locals said they had stocked up on meat, vegetables, and grains from the supermarket opposite their residential complex in preparation for the lockdown.

On Chinese social media, one netizen from Shenzhen said, “I’m stuck in the village now. All supermarket shelves have been cleared of food products.”

Some netizens claimed that the Sungang Elementary School would be closed on Dec. 3 in order to serve as a makeshift site for conducting nucleic acid testing. However, this was refuted by the Luohu district virus command center.

The outbreak of the CCP virus has prompted some locals to express dissatisfaction at the government permitting truck drivers to travel between Shenzhen and Hong Kong, which borders the mainland Chinese city. Netizens left messages disapproving of the local government’s inaction.

While Shenzhen authorities have announced the driver’s whereabouts, they have not yet disclosed information about Yang, the asymptomatic carrier.

According to Chinese state media reports, nucleic acid amplification tests were conducted on all residents in the southern district of the village on Dec. 2 evening. All residents in the No. 146 Building where Yang lives have been forcibly isolated.

Hu Yuanzhen contributed to this report.