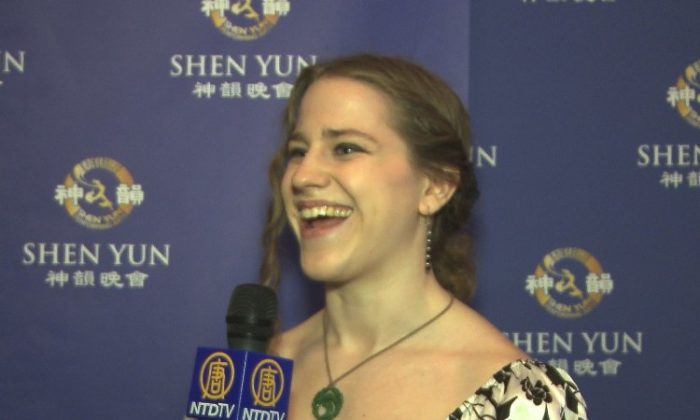 Lydia Thomas was inspired by words in the songs sung by solo vocalists in Shen Yun Performing Arts at the Kentucky Center for the Performing Arts on May 1. (Courtesy of NTD Television)
News

LOUISVILLE, Ky.—”I found the poems, the songs—especially the first one that was sung—very inspiring, and it almost brought tears to my eyes. I’m going to have to go home and write a poem about it now,” said Lydia Thomas, writer, artist and business owner, after seeing Shen Yun Performing Arts at the Kentucky Center for the Performing Arts on May 1.

She explained how the song touched her: “Just kind of how it talked about our journey is such a long one, and we just strive so hard for so much in life, but it’s really about being at peace with yourself and just making it a good journey, instead of being too worried about every little thing that happens along the way. Just make it a good journey,” she said.

Was Ms. Thomas touched as an artist? “Oh, it was beautiful! Gorgeous! I loved the symmetry of it—just when the whole group of the ladies or the men got out and they were just in the lovely, symmetrical positions. And I loved the sleeves, the sleeves were just gorgeous.

She particularly enjoyed one of the dances “the one with the weighted cloths [An Early Spring] that they would spin in their hands and throw up into the air and catch them. The beauty of the flowing colors just spoke to me. I love that part of it, just the colors, it was just amazing,” she said.

“It’s very inspiring,” she said, thinking from the perspective of an artist.

Normally Ms. Thomas works with a lot of Celtic knots in her graphic designs, but she may think about including Asian inspired motifs in the future, she said. Similarly, she typically works with black and white but may now include color.

Color and movement would be the key factors she took away from the surface level of the performance. She felt the colors were “very bright, and when you have those bright colors and they’re spinning and moving, and you let your vision blur a little bit almost, you get the bigger vision of it, and kind of the moving colors instead of the individual people. It’s just a beautiful picture with the way they use the colors and the motion to create a bigger picture.”

She had that impression of the entire show: “You get the impression, the setting of the performance by the color choice really. Either like the beautiful greens and blues of the moon dance [The Emperor Journeys to the Moon], or like the fiery blues and reds of the phoenix dance [Phoenix Fairies]. It just kind of sets the mood for it, whether it’s joyful and playful, or more muted and elegant. And really, it’s just amazing watching those flashes of colors moving. It’s all I can describe it as, just movements of color. I loved it.”

‘A great sense of peace’

On a deeper level, she was attracted to the theme of peace: “I was very impressed with the general theme of peace, and just looking inside yourself for your own peace, and sharing that with others, as opposed to being violent or being proud. Just being very peaceful.

“And just the general culture, the ancient culture of China, with Buddha and Confucius, and the desire to learn and co-exist peacefully is very inspiring compared to some other cultural themes out there that are not as peaceful.

Even though Ms. Thomas is a Christian, she said the ideas were familiar: “It does closely reflect my own beliefs, and it’s wonderful that [Shen Yun] can bring that and freely, openly express it to everyone, and not be suppressed. Like I’m very happy that here in the U.S. we are enabling … the company to share that with us and share that part of Chinese culture.”