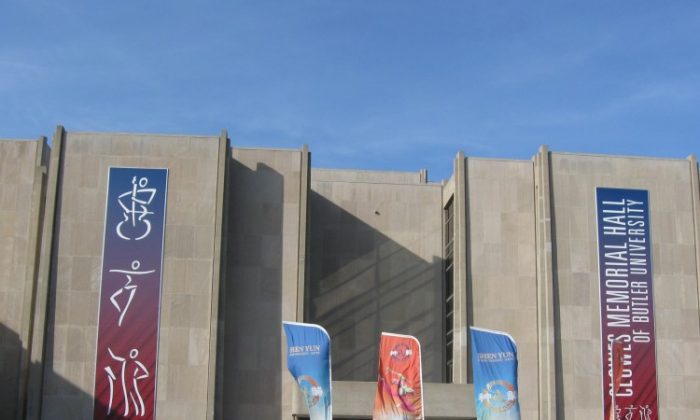 Ms. Stanley is a communication and marketing manager at the Indiana University’s School of Medicine. She continued to describe the performance as “wonderful, absolutely amazing that the dancers are so talented, and the colors and the stories are just incredible. So very, very much enjoying it.”

She said she would tell colleagues to not miss the performance. “We don’t see anything like this in the American theater … the movement, the fluidity of it, the athleticism, it combines everything, and on top of that, you have these incredible costumes, and colors. You just can’t beat it.”

Nancy Cobb, retired from the State Health Department, was also among the audience enjoying the Shen Yun performance.

“I think it is beautiful,” she said. “I am really enjoying it. I love the costumes, the colors … the ingenious way that they have done [the backdrop], and the stories. It’s quite beautiful.”

Ms. Cobb said that two dances stood out for her. The Choice, in which friends meet on Tiananmen Square. This dance depicts a scene from contemporary China, where the traditional spiritual practice of Falun Dafa is persecuted by the communist regime. “It kind of brings the heartache, and the drama, and the great personal pain involved,” she said.

How the Monkey King Came To Be, was another piece that stood out for her, which she said was clever.

Shen Yun’s trademark is the brilliantly colored handmade costumes. “They wore beautiful, beautiful costumes, and [they] really make an impression with the colors,” Ms. Cobb said.