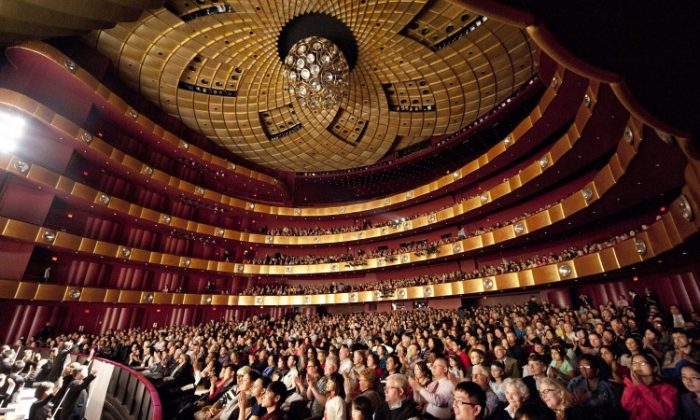 “I loved the show, I thought it was great,” said Donna Dellacroce, vice president of legal and compliance at Citibank. “It was very interesting. Every number had its own little personality.”

“In a collection of short pieces,” according to Shen Yun’s website, “audiences travel from the Himalayas to tropical lake-filled regions; from the legends of the culture’s creation over 5,000 years ago through to the story of Falun Dafa in China today; from the highest heavens down to the dusty plateaus of the Middle Kingdom.”

Classical Chinese dance is at the heart of a Shen Yun performance, explains its website. The dancers, adorned with colorful, handmade costumes, are accompanied by a unique orchestra joining East and West, digital backdrops, and award-winning vocalists.

“I thought the costuming and the backdrops were fabulous,” said Ms. Dellacroce. “It was excellent. I’m coming back next year for the new show.”

Fields throughout Chinese society, including medicine, astronomy, the culinary arts, dance, and music, were guided by profound values, explains Shen Yun’s website “Originating from Confucianism, Buddhism, and Taoism,” these include benevolence, justice, and wisdom, as well as “respect for the heavens, and divine retribution.”

These principles “all come to life, washing over the audience,” says the website and, after the Chinese Communist Party has launched various violent campaigns to try to decimate both the culture and its principles, “Shen Yun seeks to revive these virtues the world over.”

“It was beautiful, it was vibrant, it was very serene, it was colorful, it was energizing,” proclaimed Ms. Dellacroce, reiterating that she would come back next year, and adding that she will tell her friends about the performance.

“I am very happy to be here,” said Ms. Gerzon. “It is a great show. It is a lot of truth, wisdom, and history of China.”

Shen Yun is based in New York and presents an all new performance each year at the most renowned theaters worldwide, including Washington D.C.’s Kennedy Center, the Tokyo International Forum, and the Kongresshaus Zürich in Switzerland.

“We liked everything,” said Ms. Gerzon. “I would definitely tell everybody, my friends and family, about the show, and next time we are looking to go again.”