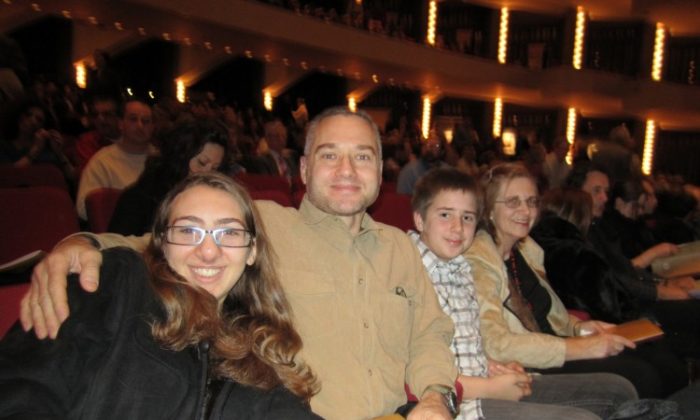 Psychiatrist Joie Zeglinski who saw Shen Yun at the National Arts Centre on Dec. 28, 2012 said the show had a transformative power that could benefit those who see it. (Courtesy of NTD Television)
News

OTTAWA, Canada—Shen Yun Performing Arts opened a window into the land of the divine during its second sold-out show at the National Arts Centre Friday night.

Friday’s presentation included dances based on history, legend, and beloved literary tales, as well as dances from China’s diverse ethnicities. Those who came to see the show praised its colours and inspiring themes.

“It’s uplifting and a delight for the senses,” said cartographer Walter Galant. Friday was his first time to see the show and he shared his thoughts during intermission.

“I find it’s touching all my senses and it makes me feel glad actually, all the bright colours, and just the movement is very different from what I’m used to.”

He said he was struck by how Shen Yun’s female dancers often gave the appearance of floating across the stage and how the male dancers flipped through the air.

Those dance movements are backed by a philharmonic orchestra unique for including Chinese instruments that lead the melodies and a vividly animated digital backdrop.

Mr. Galant said the backdrop and orchestra complimented the dancers well. He was impressed by how the dancers sometimes interacted with the projected scenes on the backdrop.

“It’s very impressive. It’s a pleasant surprise, I hadn’t seen anything like that before,” he said.

Vocal soloists also take to the stage, singing bel canto style in mandarin, a feat rare in the world. A soprano and a tenor sang before intermission during which Mr. Galant was interviewed. He said they had lovely voices, complemented well by the accompanying pianist.

He said he also liked that each of Shen Yun’s story-based dances ended on a positive note, with hope.

“It’s amazing. I love the colours. The dancing I think is fantastic. It’s also perfectly timed,” she said.

Mother Christine Galant said the costumes were beautiful and the dancers were excellent.

“My gosh they are all doing the same thing at the same time. There’s nobody our of step, nothing. Excellent.”

She said the show was fun for the whole family.

“Everybody can enjoy this one. There’s something for everybody. There’s a little bit of comedy, with the monks and with the rabbit. It was cute.”

In the dance When Shaolin Monks Protected The Emperor, dancers portray the legend of why Shaolin monks eat meat after the monks fend off assailants attacking the soon-to-be founding emperor of the Tang dynasty.

Joie Zeglinski, a psychiatrist, gushed about the show.

“I thought that it was beautiful, breathtaking, it was magical, I felt as if I was in another land,” she said.

“It was very transporting, the sets and the background, and the way that the dancers would just leap into the air and suddenly be flying through the screens was beautiful. It was something that you would dream about,” she said.

Ms. Zeglinski said the heavenly scenes presented on stage and on the backdrop left her joyful and exhilarated. The performance conveyed the transformation power of beauty and dance and that there is something beyond an earthly, grounded existence. That beauty could be healing, she said.

“I know that, from my studies in psychiatry, that the arts are a medicine. … It is very powerful, and it brings people out of the depths of their traumas or their everyday struggles, and it gives them something hopeful, something beautiful to live for,” Ms. Zeglinski noted.

“I think that people who are feeling that life is sad and difficult or painful could come to a show like this and leave feeling transported, feeling as if the world can be a beautiful place, even if it’s not in this moment, but being in a show like this gives you hope.”

“I feel blessed that I can see a show like this in Ottawa.”

Jenny Krystoff, an accountant at Ottawa-based Robert Half Management Resources who bought tickets to the show for her mother as a Christmas gift, said the experience was stunning.

“I loved it. I didn’t know what to expect, but I absolutely loved the dancers,” she said.

“The costumes were my favourite, absolutely gorgeous—The colours were just amazing.”

Ms. Krystoff was also amazed at the athleticism in classical Chinese dance, which according to the Shen Yun website is one of the most comprehensive dance systems in the world.

“The movements, the flips—They just made everything seem effortless,” said Ms. Krystoff.

“It just flowed—It was a kaleidoscope of colours and movement, it was beautiful,” said Kathy. “You got pulled into it.”

“The tenor was lovely—I could listen to him for a long time,” she said.