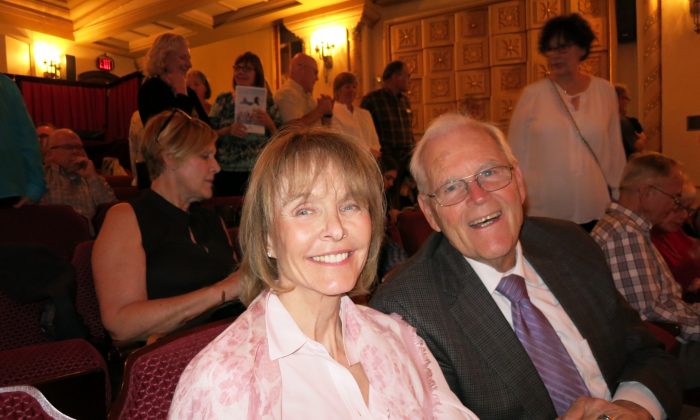 SANTA BARBARA, Calif.—Everyone wants to see Shen Yun Performing Arts, said John Hook, after seeing the classical Chinese dance and music company. People had talked to him before he attended, saying, “‘Oh, you are going to Shen Yun? Oh, yes, I wish we could go.'”

The way Shen Yun tells its stories, the former elementary school teacher for 51 years said, you don’t even need to know Chinese. The dance and the acting allow you to understand the stories plucked from China’s 5,000 years, and to “laugh at the right spots.”

It was “very easy to understand because it’s so beautiful,” he said, and added that the animated graphics allowing characters to move “out of the sea and into heaven” helped with the understanding. “It all ties together.”

Classical Chinese dance, which Shen Yun highlights, is able to capture and clearly express stories that give viewers a taste of the essence of China—of traditional China of the past.

For Mr. Hook, Shen Yun aims to tell the world, “This is China,” that what you are seeing on stage now is the real China, not what you read in the papers today.

Shen Yun is “keeping the spirit alive of Chinese culture,” he said, “because it’s been buried [for] so long now, at least in our life time.”

Mr. Hook attended the Granada Theatre performance on April 30 with Chris Welchman, a writer, who was blown away, she said, by the performance.

She found the history and the stories fascinating, and enormously educational. She learned about China from the program booklet with the background information it provided, from the bilingual emcees introducing each of the 20 or so pieces, and from the whole experience of attending.

The essence of Chinese culture is in its inseparable bond with the divine. In fact, the Celestial Empire, as China was once known, was said to have been a gift from the heavens.

Each of Shen Yun dances, vocal or instrumental performances, in some way ties viewers back to its spiritual basis.

For Ms. Welchman, the Creator as presented in the performance overrides both materialism and the military establishment. “It seems to me the spirituality of the people and god is winning,” she said.

The performance had an “almost indescribable beauty” for her, which is also how another audience member described it.

Former professor and lecturer of Korean studies at University of California—Santa Barbara Sunny Jun said the lyrics to the songs, translated and projected behind the singers, were “beyond my expression—excellent and beautiful.”

Ms. Jun is also a published poet and expressed that she, too, had learned about Chinese culture from her afternoon’s experience.

She was surprised to learn that China, also once also known as the Middle Kingdom, saw the peoples of Tibet, Mongolia, and Manchuria as part of China, and that their folk dances were included, showing great cultural variety.

She was surprised to learn that the color red, which she thought had been considered a lucky color for the Chinese, was only shown to represent evil: the “communist presence in China represents [the] color of blood.”

And she loved to learn that Shen Yun means the beauty of divine beings dancing. “I truly love that name,” she said.

Of the Shen Yun dancers, she said, “I admire and I respect [them], and my deep gratitude to make me taste and appreciate this art.”