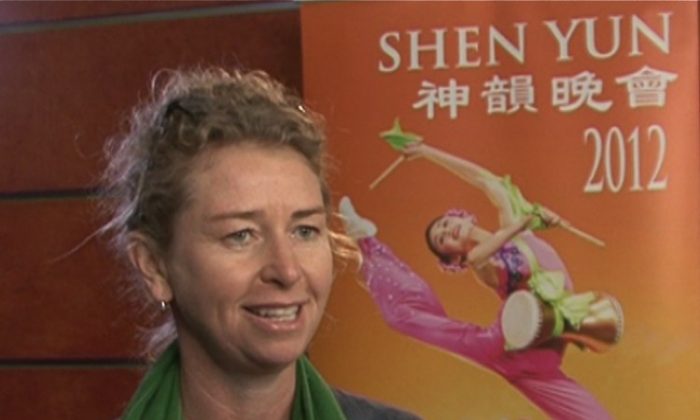 SYDNEY—Wine maker, Susan Frazier was invited to Shen Yun Performing Arts New York Company by her Chinese friend. The performance played during the afternoon at Sydney’s Capital Theatre on Wednesday, May 2. She found the show “truly spectacular.”

Ms. Frazier and Adam Bell turned their passion into reality by establishing the winery “Whispering Brook” in the prestigious Hunter Valley. It is featured as one of the best seven Hunter Valley wineries in Australia.

Ms. Frazier was in awe of the Chinese history “that it spans such a terribly long time, 5,000 years compared with our culture in Australia is a long time,” she said. “And it’s obviously very diverse and there’s a lot of different cultural groups,” she added.

Formed in 2006 in New York, Shen Yun Performing Arts has three companies presenting classical Chinese dance and music to audiences around the globe. According to Shen Yun’s website, classical Chinese dance is an art-form thousands of years old, and over the years it has absorbed profound wisdom from every era and dynasty, becoming a complete system of dance embodying traditional aesthetic principles with its unique dance movements, rhythms, and inner meaning.

Ms. Frazier was particularly moved by the story of Falun Dafa in China today, a traditional spiritual discipline whose followers are persecuted for their faith.

“I had tears in my eyes,” said Ms Frazier “Because I know how real that is and the struggles that people still have today.”

She was also impressed by the Shen Yun Orchestra, because she couldn’t help take notice.

“I’ve been noticing, because I’ve been sitting close to the front, and they just really add to the magic of the whole show,” she said.

Each Shen Yun company features an orchestra that blends the two disparate sounds of East and West together to seamlessly create one fresh harmonious sound, what makes the Shen Yun Performing Arts Orchestra unique, according to the company’s website.

However, other highlights of the show was not only “seeing the dancers perform so beautifully,” said Ms. Frazier. “but also the stories being told are really memorable,” she added.