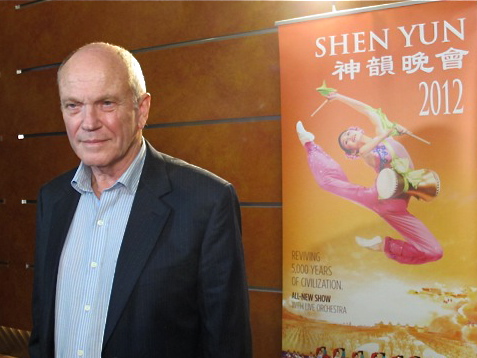 Mr. Walker found the performance “tremendous.” “I never saw anything like that, it’s absolutely beautiful,” he said.

Shen Yun Performing Arts was created in New York in 2006 with a mission to reclaim and renew the true, divinely inspired cultural heritage of China.

Mr. Walker was very much impressed with the visual aspect of the performance. “Oh, those visuals, where did [Shen Yun] get those colours from … they are out of this world.”

Every costume in a Shen Yun performance is presented with brilliant colors, displaying a splendid spectacle, states the Shen Yun website.

With state-of-the-art graphics technology, Shen Yun’s digital-backdrop team creates vividly animated settings, extending the stage and transporting the audience to a world where heaven and earth are one.

Mr. Walker said he was impressed that the performance was a rekindling of traditional Chinese culture. Contemporary dances depicting the courage and bravery of Falun Gong practitioners being persecuted in China today for their faith, were also presented.

“It spoke about Falun Gong … its a creative thing, historical, [trying] to preserve the culture,” he expressed.

The story about the Monkey King interested Mr. Walker, calling it a beautiful parable. “I think people should have a bit more knowledge about Chinese culture,” he said.

In the dance How the Monkey King Came to Be, when the peacemaking attempts of a friendly Taoist fail, Monkey wreaks havoc in Heaven until the Buddha traps him in his palm. He pleads forgiveness from the Goddess of Mercy, who appoints him to guard a monk journeying westward for Buddhist scriptures, explains the website.