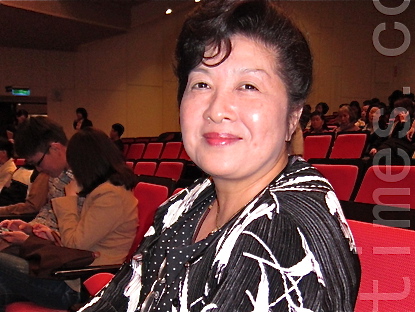 TAINAN, Taiwan—Classical Chinese dance presented by the Shen Yun Performing Arts New York Company is taking southern Taiwan by storm. Wu Jiahu, director of Tainan Association of Beauty Therapy and Cosmetology, was among those in the audience of Shen Yun’s performance on the evening of March 8 at Tainan Municipal Cultural Center Auditorium. As the curtain rose for each program, she felt as if she were transported to another realm.

Attracted by dancers’ physical bearing, unique postures, and technical movements, Ms. Wu said, “Each single movement, [each] detail is perfectly done!” She particularly pointed out the excellent basic training of Shen Yun dancers, their perfect choreography and their style.

Ms. Wu is also a lecturer at several universities of technology. She said the colors of the costumes worn by the performers matched the amazing backdrops so that performers looked integrated into the backdrops, and that colors were so bright and colorful as to draw audience’s attention to performers’ movement and posture.

She believed that Shen Yun’s colors are rarely seen, truly reflecting the original colors in nature, and said, “For instance, the colors of the lotus can never be created today.”

Shen Yun performance features the unique plot of each program as well as thought-provoking and profound lyrics which revealed life’s meaning and goals.

“Living in such a busy society, we should learn how to let go of our attachments. I think [Shen Yun] lets me feel, perhaps, I should give myself more time to find inner calm and peace.” As revealed in the lyrics, she continued, “humans are from Heaven,” but trapped in our daily busy routine, “we fail to find out our inner Buddha nature.”

Having traveled to several countries for academic and cultural exchange, Ms. Wu hoped that Taiwan could have a performing group as excellent as Shen Yun to present Taiwanese culture features in the form of dance.

At the end of the interview, Ms. Wu said that she has become a Shen Yun fan.