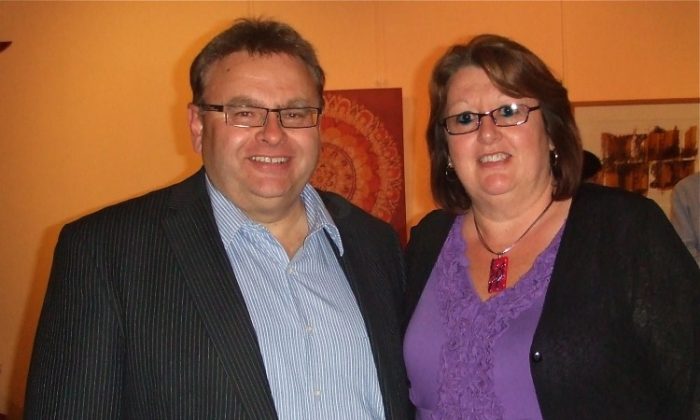 Shen Yun: ‘The most striking of performances’ Says Mayor Wallace

Mayor Wallace was accompanied by his wife, the Mayoress Linda Wallace, who was also thrilled.

The Lower Hutt mayor is also a Justice of the Peace and is well known in his community for his dedication to fundraising, organising foodbank appeals and co-ordinating youth awards.

“We are just so pleased we came,” he said, adding that the dancers and singers were very talented and “the vibrancy of the whole event is just outstanding.”

Mayor Wallace fell in love with the music, which he found both tranquil and therapeutic.

Shen Yun Performing Arts, based in New York, is a classical Chinese dance and music show that is reviving 5,000 years ancient Chinese culture that nearly disappeared under more than 60 years of rule by the Chinese Communist Party.

The Shen Yun Orchestra is unique in that it is made up of both classical Western and traditional Eastern instruments that create melodies that are both mesmerising and fresh, says the company’s website.

Mayor Wallace said that the performance had brought up some mixed emotions. “It still was all about a celebration with some true messages there as well,” he said.

As part of the Shen Yun performance, two contemporary dances show the bravery and courage of practitioners of Falun Dafa, a peaceful, spiritual mind-body discipline, who are being persecuted in China today.

China’s ruling party had “issues and I think they got that message across in a … very powerful and very subtle way,” said Mayor Wallace.

Classical Chinese dance has a history of thousands of years having been passed down through the imperial courts and ancient theatres, according to the Shen Yun website.

Disciplined and systematic training is required to perfect the hundreds of poses and movements, as well as the many flips and tumbling techniques that make up classical Chinese dance.

The mayoress said that after watching the performance she had gained a deeper appreciation of Chinese traditions. “Of their 5,000 years of civilization that they were recording on stage tonight—absolutely incredible,” she said.

Shen Yun’s colourful costumes, which include attire from the many dynasties as well clothing from some of China’s more than fifty ethnic groups, also enchanted the mayoress.

She said, “The way the costumes were so beautiful and flowing. It was just quite amazing to see the way they used their accessories—their fans on the stage, just to give that whole expression of what the stories were that they were telling.”

In the dance, Lotus Leaves, the dancers carry fans that sway like lily pads as they dance on the water.

“Just the way they used those fans, it just absolutely amazed me,” said the mayoress.

She also found the dance Snowflakes Welcoming Spring, incredible. In this dance, the dancers twirl sequined handkerchiefs as they acknowledge the end of Winter and welcome the debut of Spring.

“It just absolutely amazed me the way they were spinning their pieces. The whole art of it was just quite incredible.”

Before each performance, a brief explanation of the following program is given by two emcees.

“I think it was great having the narrators there because it gave you an understanding of each segment and stories that they were depicting, and I think it was just done in such a graceful and beautiful way,” said the mayoress.

“So it truly is performing arts at the very highest level.”

The Shen Yun Performance left the mayoress with a great appreciation of Chinese culture. “Of their 5,000 years of civilization that they were recording on stage tonight-absolutely incredible,” she said.

Her husband agreed, adding, “I think that is the most striking of performances.”

“I would like to come back and see it again because I am sure there was a lot I missed tonight,” said the mayoress.