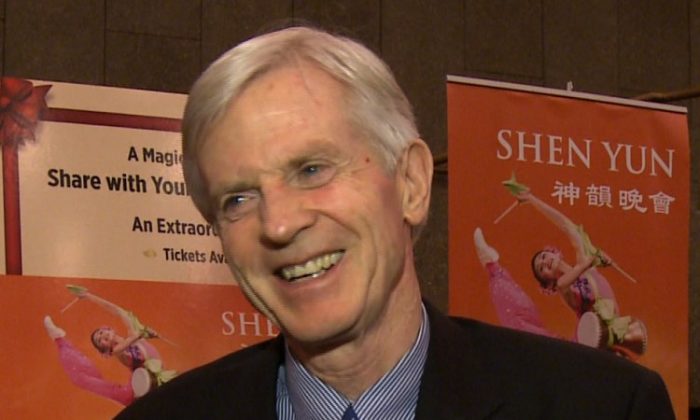 OTTAWA—A window to a different China opened on stage at the National Arts Centre on Tuesday, a China of dynastic brilliance and magic where evildoers receive immediate retribution.

Shen Yun Performing Arts staged the second of five shows at the NAC, a presentation that author, human rights defender, and former MP David Kilgour has enjoyed year after year.

Mr. Kilgour has been coming to see Shen Yun for the past six years, inside and outside of Ottawa, and remembers the first year it came to Ottawa for a single show.

“The place was jammed and they had to have more shows. It’s catching on.”

“It’s becoming a major part of the cultural scene in Ottawa,” he said.

Mr. Kilgour has raved about the performance each year he has come, this time proclaiming he had no idea how it could get any better, but he expected it would.

“The dancing was over the top, it was so good and the costumes were the best I’ve ever seen. The singing was beautiful.”

Mr. Kilgour said the show was phenomenal and moved him deeply.

“In short, it’s the best show that I’ve seen and I can hardly wait until next year.”

He said everybody he heard leaving the show around him was saying the same thing.
“It was the best show they’ve seen,” repeated Kilgour.

“They’re so precise. Nobody’s out of step. I think it’s the best I’ve ever seen,” adding that their costumes were “out of this world.”

He said the music was also phenomenal, but the dancing was so mesmerizing that at times he almost didn’t hear the music.

Shen Yun tours the world on a mission to revive 5,000 years of divinely inspired culture, a history all but destroyed under 60 years of communist rule, especially during the chaos of the Cultural Revolution.

Along with Chinese ethnic and folk dances, Shen Yun showcases classical Chinese dance, with many of the pieces depicting ancient stories or scenes from Chinese history.

Many tales, some based in the present, revolve around the contest between good and evil, a theme Kilgour said he particularly enjoyed.

“History has been a fight in every country with those issues,” he said.

Mr. Kilgour would know. A committed human rights and democracy advocate, he has travelled the world and lent his voice to causes from oppression in Vietnam to the lack of protection for whistle-blowers in Canada.

He was expelled from the Progressive Conservative Party midway through his political career because he opposed the GST. After being elected a Liberal, he left that party in part over Canada’s inaction during the crisis in Darfur, Sudan. B

Before leaving the party, he served as Secretary of State (Asia-Pacific). Since then he’s worked on behalf of the Ashraf in Iraq, democracy in Vietnam, human rights in Africa and Asia, and dozens of other causes.

Kilgour and human rights lawyer David Matas won the 2009 Human Rights Award from the German-based International Society for Human Rights for their work to expose organ harvesting of Falun Gong practitioners in China.

But on this night, though two dances did touch on modern China, Shen Yun presented true traditional Chinese culture and history that Kilgour said most non-Chinese wouldn’t normally be exposed to.

“They get a real sense of the real culture we never see when we go to China,” he said.

“You get a whole different dimension of China. That’s what’s unique about it. You see China as it could be, as it should be, as I think it will be. Certainly not as it is now.”

“The people who designed it had that in mind.”