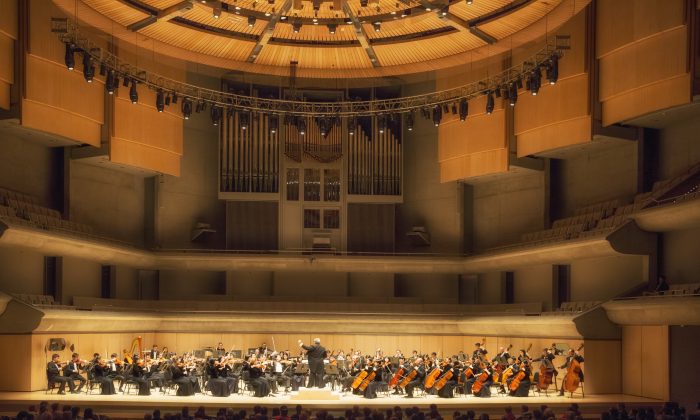 TORONTO—An expectant audience greeted the Shen Yun Symphony Orchestra at Roy Thomson Hall in Toronto on Oct. 3. By the end of the sold-out performance they were on their feet wanting more, with thundering applause bringing the musicians back for two encores.

It was a hugely successful beginning to Shen Yun’s 11-city North American tour, and left many thrilled with the fresh sound of this one-of-a-kind orchestra.

The unique thing about the New York-based orchestra is that it combines Chinese and Western instruments, with the Chinese instruments leading the melodies while the Western symphony serves as the foundation—something new and groundbreaking in the world of classical music.

Accomplished Toronto conductor Kerry Stratton, who has seen the Shen Yun perform before, praised its conductor Milen Nachev, saying he admires him very much.

“The combination is beautiful,” he said, referring to the blending of Chinese and Western instruments.

“To combine that sound—that very ancient sound with the more modern, let’s say, Western symphony orchestra sound—is a challenge that they’ve met, they’ve met very well. And the colour is unique. You won’t find this colour anywhere else,” he said.

Prominent ballet veterans Solomon Tencer and Nadia Veselova-Tencer, who for years have put on world-class ballet productions in international venues, also attended. Ms. Veselova-Tencer, founder and artistic director of the Academy of Ballet & Jazz, said she found the orchestra “absolutely fantastic,” and said all Torontonians should see the concert.

“I loved it, and I would like to hear more of it,” she said. “It has beautiful musicians and a full orchestra, which is great to see. It is not so often you can see such a—I would say—marvellous work.”

Rick Phillips, who has been affiliated with CBC Radio for 30 years and has been known to classical music lovers across the country for over a decade as the host and producer of “Sound Advice,” said he had never experienced a concert like this one.

“I really enjoyed the mixture of the Chinese instruments with the Western instruments,” he said.

Musician Jan Hanko, who plays string instruments and has been performing in the Toronto Mandolin Orchestra for 25 years, was impressed with the number of instruments in the orchestra.

“There was a great mixture,” he said. “Everybody was well balanced.”

Radio host Tom Quick, an avid classical music advocate, said Shen Yun was “without question one of the best orchestras I have heard in a long, long time.”

“It was quite an experience. I thoroughly enjoyed it.”

Composer and oboist Elizabeth Raum also had high praise, saying she found the prowess of the musicians overwhelming and thought the audience felt the same way.

I think the audience was overwhelmed, too. I don’t think I’ve ever seen two standing ovations and two encores like that, and I think it would have gone on but the conductor left.
— Elizabeth Raum, Former principal oboist with the Regina Symphony Orchestra

“It was quite spectacular I must say, and I’m overwhelmed by the quality of the musicians—they are wonderful,” she said.

“I think the audience was overwhelmed, too. I don’t think I’ve ever seen two standing ovations and two encores like that, and I think it would have gone on but the conductor left,” said Raum, who was the principal oboist with the Regina Symphony Orchestra.

Alison Scarrow, the general manager of Festival of the Sound in Parry Sound, Ont., said the performance touched her deeply.

“This has been so enjoyable. The music touches the soul. It’s joyful, it’s all emotion, and I have loved every minute of it today. I’m so glad I could have the opportunity to be here,” she said.

Determined Not to Miss the Concert

Montreal resident Raymond Rouillard got to enjoy the orchestra without actually seeing it perform.

He was accompanying his wife on a trip to Toronto where she was attending a conference. He had heard about the Shen Yun Symphony Orchestra and wanted to see the performance, so instead of taking a plane home, he told his wife that the two of them should drive back so that he could attend the concert.

Not having purchased a ticket in advance, the retired businessman joined the long lineup at the theatre, but the performance was sold out and he was left without a ticket.

Mr. Rouillard was disappointed but he didn’t want to give up. He sat on a chair by the entrance to the music hall, where a speaker was broadcasting the performance live. He initially intended to listen for only a few minutes, but he was so captivated by the sound of the orchestra that he listened to the entire performance.

The music resonated with him on a deep level.

“I enjoyed it very much. I was amazingly surprised about how they can deliver this sufficiently to touch my heart that much, and I surprised myself that I was crying just by listening to the music, and got carried [away] by the music,” he said.

Gary Cooper, who works in advertising, was also determined to attend the concert. He was on a business trip to Calgary, but rushed back to see Shen Yun perform.

“Just beautiful. We just thoroughly enjoyed it. We’re very grateful to be here,” he said.

The Shen Yun Symphony Orchestra is continuing its tour of North America with an afternoon performance in Burlington, Vermont, on Sunday, Oct. 4, and nine other stops in the United States.