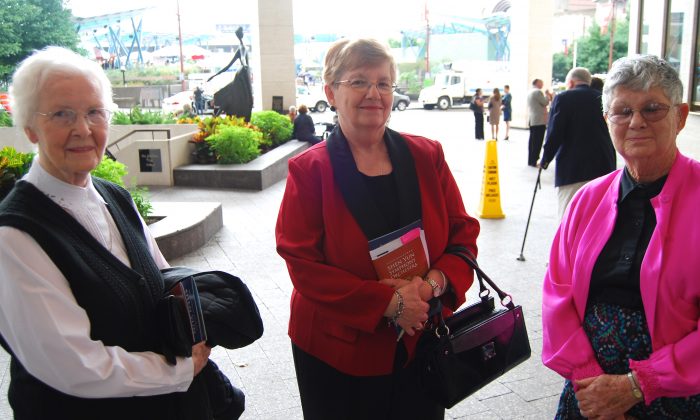 “I very much enjoyed it,” said Ms. Alana McCormick of McCormick Business Development. “I liked the Chinese instruments mixed into the regular symphony instruments—it’s made it very interesting. I felt they blended beautifully, I really did.”

Ms. McCormick said she noticed the orchestra was able to blend the chords normally used by the traditional Chinese instruments, like the erhu and pipa, with the classical sounds of the Western symphony.

“It’d be very familiar, but it’d have that little interesting chord,” Ms. McCormick said. “Plus, they used a lot of different percussion-type instruments that I’m not familiar with, so I really liked it—I think it’s really nice.”

No other orchestra in the world has succeeded in combining the sounds of the East and West like Shen Yun Symphony Orchestra. For the performance, Milen Nachev, Leif Erikson Sundstrup, Keng-Wei Kuo, and Yohei Sato conducted both original compositions and classical pieces like Beethoven’s “Egmont” Overture.

Ms. Driscoll, a frequent symphony attendee, said that sitting right up at the very front allowed her to see even the muscles of the musicians.

“Excellent, it was excellent,” Ms. Driscoll said. “Excellent—couldn’t be improved.”

Ms. Kavanagh was moved by the performance and said it was more than she could put into words. “It was marvelous,” she said. “I wouldn’t have time to go into all the detail.”

“It was really beautiful,” she added. “I felt I was in heaven most of the time.”

Ms. Parvis noted her similar feeling. “It was almost dreamlike,” she said. “I had no sense of time. It was incredible.”

“It was fabulous, all those emotions. It was just very exciting,” she concluded.