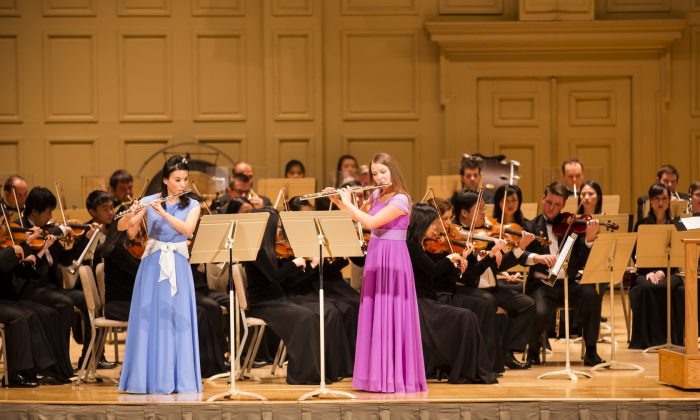 BOSTON—Shen Yun Symphony Orchestra gave a one-of-a-kind performance on Oct. 9 at Boston Symphony Hall. It was warmly received by its audience, including David Grahling who has worked at the theatre for six years and has seen over 1,000 performances.

The orchestra combines both Chinese and Western instruments, and it is the orchestra of the New York-based Shen Yun Performing Arts. The internationally acclaimed classical Chinese dance and music company has toured 30 countries and delighted millions of people.

The orchestra’s “original music draws upon China’s 5,000 years of civilization—with its array of dynasties and peoples from which to find inspiration—breathing new life into themes and musical styles from ancient times,” according to the Shen Yun’s website.

“The harmonies, the melodies, the orchestra writing is very interesting,” Mr. Grahling said.

“There is a lot of Western music that you can hear in the writing, but there is also an Oriental flavor to it that I find very … enjoyable,” he added.

Mr. Grahling said he hopes to hear the performance again. He added that once the message gets out there, there would be more interest in the Shen Yun Symphony Orchestra because people in Boston are already excited about it.

“It is absolutely beautiful; it is amazing,” said Fernando Bazoberry, a physician, who also attended the performance Wednesday night.

Alex Ishchenko, who listened to the performance with his mother, said the music is “very flawless.”

“It was very harmonic. I really like it, love it. It’s outstanding,” said Claudia Heince, who attended the show with Mr. Bazoberry.

Mr. Bazoberry said he had a feeling that many things in the world—such as ceramics, astronomy, science, and mathematics—have been influenced by Chinese culture.

“Chinese music is something that probably complements and has helped everybody improve, or given a head start to other musicians, or artists, or instruments,” Mr. Bazoberry said.

The music of Shen Yun Symphony Orchestra is based on the harmonic language of the Western Classical and Romantic tradition, and includes Chinese folk tunes, indigenous musical scales, and musical practices from China’s various dynasties, according to Shen Yun’s website.