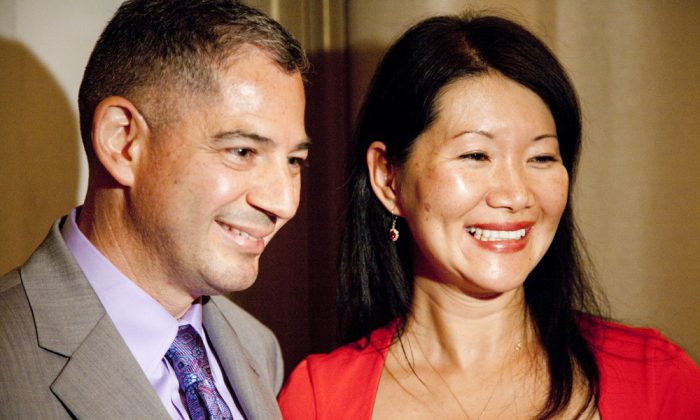 WASHINGTON—The Shen Yun Symphony Orchestra (SYSO) began a seven-city tour this year on Friday night at the John F. Kennedy Center for the Performing Arts. Unique to the performance for a classical concert was the addition of traditional Chinese instruments and six original Chinese instrumental compositions.

Also original were three composition sung in bel canto style. Interspersed between the instrumental music were individual solos accompanied by the orchestra of two different sopranos and one tenor, singing in Chinese (with translation in the program notes).

Taken altogether, the experience was like being immersed in Chinese culture.

John Adams, an IT finance officer, and wife Hifumi, felt they were in China. Mr. Adams was drawn to the Chinese pieces.

He said they really made him feel like he was transported into some Asian country.

“I’m Japanese, but I always wanted to be a Chinese. Since I was little, I loved Chinese culture, so I just had so much fun,” added Mrs. Adams.

SYSO drew upon Chinese folk tunes and indigenous musical scales. Some of the Chinese compositions recreate the majesty of China’s imperial dynasties. So, it was understandable that the Adams could feel transported to China.

The Chinese-inspired music is balanced, however, with Western classical music, most notably, Tchaikovsky’s Polonaise from “Eugene Onegin” and Beethoven’s “Egmont” Overture as well as other Western pieces.

Mr. and Mrs. Adams are planning to come back in January to the Kennedy Center Opera House when there will be classical Chinese dance and music. Now that they have heard the music, they’re eager to see the dancing.