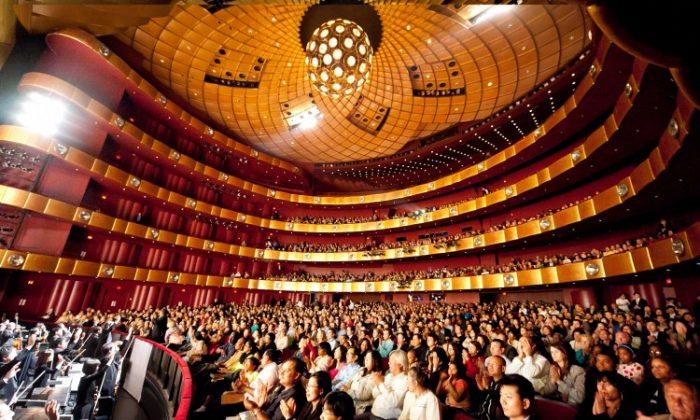 NEW YORK—Shen Yun Performing Arts graced the stage at Lincoln Center’s David H. Koch Theater on Friday evening, enchanting the audience with a display of one of the oldest cultures in the world.

“I found it simply magnificent: the choreography, the costumes, the colors, the coordination, the precision of movement, simply superb. It can’t be beaten by anything I have ever seen,” said Jo-Ann Leamon, a retired micro-biologist and owner of Beyond Beautiful Aesthetics.

New York-based Shen Yun tours the world reviving the 5,000 year-old, divinely inspired Chinese culture, a culture that was all but demolished by more than 60 years of communist rule, according to the company’s website. “However, the deeper spiritual core of the ancient culture, with its values of benevolence, honor, propriety, wisdom, and sincerity, as well as a reverence for the gods and the heavens, cannot be destroyed,” the website states.

The history of the Chinese people impressed Ms. Leamon, who found that the performance aptly demonstrates “the progressiveness as well as the trials and tribulations that they’ve been through.

“I am delighted that I come this year and I will come again,” Ms. Leamon added. “I’ll be back next year and year after that and as long they come, I will come.”

Classical Chinese dance is at the heart of the Shen Yun performance, which is one of the most comprehensive dance forms in the world, according to Shen Yun’s website. The dancers are adorned with hand-made garments that span China’s dynasties, regions, and ethnic groups, and accompanied by digital backdrops and a unique orchestra that joins East and West.

Award-winning vocalists singing original compositions in bel canto style in Chinese with English subtitles are another aspect of Shen Yun.

“The singing was beautiful … The voices are simply magnificent,” said Ms. Leamon, “and the projection of their voices simply superb.”

“The singer must grasp the highly difficult technical requirements of bel canto operatic singing while retaining the proper Chinese articulation and diction—today, this is unparalleled,” explains Shen Yun’s website.

“I was just delighted,” said Ms. Leamon. “Overall, the performance was magnificence.”

“I had such a magnificent time,” she said. “It is absolutely beautiful, precision-wise, everything was just grand. I had a wonderful, wonderful time. And I am going to tell all my friends.”

“The choreography and the colors are two things that stick out,” said Mr. Balogh. “And learning about the Chinese culture is very interesting to me.”

Sleeves of Silk was a dance that Mr. Balogh particularly enjoyed. In the dance, what are known as “water sleeves” are used.

“Acting as extensions of a dancer’s arms, these sleeves linger in the air long after a movement is finished,” says Shen Yun’s program book. “The effect is akin to fluttering wings or trailing ripples, a visual echo of the performer as she glides from one movement to the next. On earth, water sleeves accompany the most graceful of dancers; in heaven, the lightest, most airborne fairy.”

He also found it intriguing to learn about the different ethnicities within Chinese culture; alongside classical Chinese dance, Shen Yun’s program features ethnic and folk dances, such as Mongol, Amei, and Qiang.

Mr. Balogh expounded on what impressed him about the choreography.