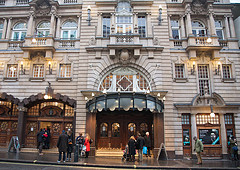 The London Coliseum will host, in April, one of the three Shen Yun Performing Arts companies that simultaneously tour the world. (Roger Luo/Da Ji Yuan/The Epoch Times)
US

Shen Yun Set to Perform at the London Coliseum

LONDON—Shen Yun Performing Arts International Company is to perform in London on the evening of April 12, following successful performances in Paris and The Hague.

It’s the second time one of the three Shen Yun companies has come to perform at The London Coliseum, having delighted audiences in 2011.

Vice-President of the European Parliament, Edward McMillan-Scott, sent a note of greeting to Shen Yun before the company’s arrival in the UK.

“I believe that anyone who appreciates the arts cannot fail to be impressed by this remarkable performance. I am happy to have welcomed Shen Yun Performing Arts to the European Parliament – the heart of democracy in Europe – on numerous occasions to launch their European tour,” Mr McMillan-Scott said in his statement.

He continued: “These days, especially in China, it is increasingly difficult to break through the mass media and commercial messages to find something that is arresting and interesting. I think Shen Yun achieves this, and offers something entirely different and new. I would encourage everyone to attend this very beautiful and enjoyable show.”

In previous years Shen Yun has performed at Royal Festival Hall, the New London Theatre, and in Edinburgh and Wales.

This year’s London show is scheduled to run until Sunday April 15, with five performances—three in the evening, and two matinees.

MEP Gerard Batten said that Shen Yun “offers a beacon of hope for democracy and freedom in China.” He encouraged Shen Yun Performing Arts to “come to London, put on a great show, have a wonderful time, send a positive message to Londoners and the British people who come to see it and also back home to the oppressed people in China who live under the heel of the Chinese Communist Party.”

Lord Grantchester said he was looking forward to Shen Yun with “great enthusiasm”, saying the “colours and design of the costumes make it a stunning display.”

Celebrities likewise welcomed Shen Yun to London, including former Pussycat Doll Kimberly Wyatt. Ms Wyatt said: “I think you guys have had such an impact already, I want to go and see the show and hope that many others come and support everything that you do.”

The Gadget Show presenter Suzi Perry said she was “honoured” to have Shen Yun in the UK.

Tickets are still available for the London shows via ShenYunPerformingArts.org