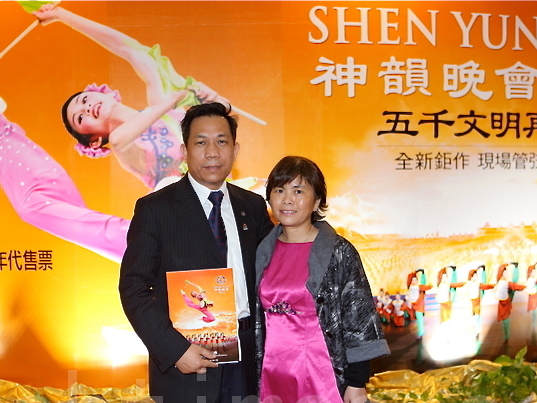 Mr. Chen was amidst the audience attending the presentation held on April 7 at the Performance Hall of Taoyuan County Performing Arts Center.

Shen Yun has at heart to reawaken China’s 5,000 years of a divinely-inspired culture, all but lost in the past 60 years under Chinese communist rule. With a talented line-up of dancers, vocalists and musicians, breathtaking animated backdrops, colourful costumes, and an orchestra combining the best of the Western and Chinese musical instruments, Mr Chen was left moved.

“We feel that Chinese culture was increasingly being forgotten, but now it seems to be consolidated again… the artist’s body language is indeed perfect,” he said. “Seeing Shen Yun made me feel that the long lost [traditional values] seemed to be retrieved all of a sudden, so it really touched the bottom of my heart.

“It is because we are all Chinese that I was moved so deeply. The Chinese culture is really magnificent. I wonder how these performers are trained. It is really incredible.”

Mr. Chen said as soon as the opening curtain went up on the first program, An Era Begins, he was overwhelmed. “It was indeed great. I didn’t expect that a Shen Yun performance would be so wonderful … really meaningful.”

He was also deeply impressed with the synchronization between the dancers and the dynamic backdrop scenes that moved smoothly from scene to scene.

He showered praises upon the Shen Yun Performing Arts Orchestra’s perfect combination of Chinese and Western musical instruments and applauded the male and female solo vocalists, extolling the virtues of the lyrics.

“Their level is really very high, and their vital capacity is very strong. I stared at the lyrics while listening to the songs sung by the vocalists. I felt the overall content is very meaningful.”