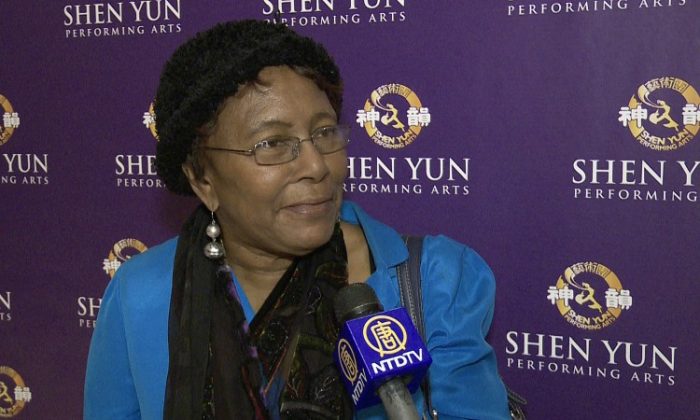 Shen Yun ‘Reaches to Everyone’

“Tonight’s show was very exciting, rewarding,” she said. “It is a wonderful authentic lesson of 5,000 years of Chinese history.”

Shen Yun’s mission is “reviving 5,000 years of divinely inspired Chinese culture,” according to its website.

“Sophisticated dance techniques, an orchestra that combines instruments East and West, beautiful costumes, and a stunning back drop—this is Shen Yun at first glance,” explains the website. “But digging deeper, one discovers a sea of traditional Chinese culture. Mortals and divine beings merge on stage as one. Principles such as benevolence and justice, propriety and wisdom, respect for the heavens, and divine retribution, all come to life, washing over the audience.”

“There is music, there is dance, it’s art, it is everything involved,” said Ms. Collins. “And it teaches a lesson that one will be rewarded for doing good in life.”

Ms. Collins was “excited, waiting for the outcome” of the dance How the Monkey King Came to Be.
“I wanted to see what was going to happen,” she explained.

In the dance, the central character in China’s classic novel Journey to the West gets himself into a humorous series of events.

“I had a sense of suspense and I am happy that everything ends showing that if you do good in life, you are going to be rewarded, and you are going to achieve justice,” emphasized Ms. Collins.

The performance is not constricted by any barriers, according to Ms. Collins. She was impressed with how “the dance reaches to everyone.”

“Everyone loves dance, performance,” she said. “That anybody can read it. You don’t have to speak the language in order to see what is going on. Body language is universal.”