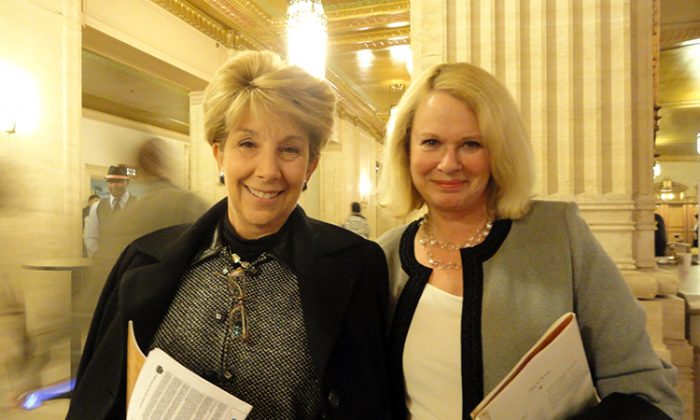 CHICAGO—The beautiful Civic Opera House provided the perfect setting for the Chicago premier of the 2012 season of Shen Yun Performing Arts on April 19.

Ms. Taylor works for United Airlines as a flight attendant. Ms. Wood is an attorney and was first female lieutenant governor of Illinois.

Shen Yun, a New York based company, is on mission to revive traditional Chinese culture, which was all but wiped out after more than 60 years of communist rule, which included the cultural revolution.

“I liked all the different stories that are told,” said Ms. Taylor. “I like the way they have the screen set up and the different characters.”

One dance that stood out for Ms. Taylor was the tale of the Monkey King—a portrayal of the main character from the classic Chinese novel Journey to the West.

“I liked the monk one too,” Ms. Wood added, referring to a lighthearted dance with brooms and washcloths, Joyful Little Monks. “That was funny.”

Another favorite of both women was Lotus Leaves, where young maidens dance with unique green fans resembling lily pads.

“Those were pretty,” Ms. Taylor said. “The costumes are just beautiful. You feel like you’re in the middle of a garden.”

Both women were impressed with the show’s live orchestra—an unusual ensemble featuring both Chinese and Western instruments. But as far as the show’s overall message, Ms. Taylor observed that the show demonstrated the struggle of “good versus evil.”

“There was a real spirituality of dance and culture,” Corinne Wood added.