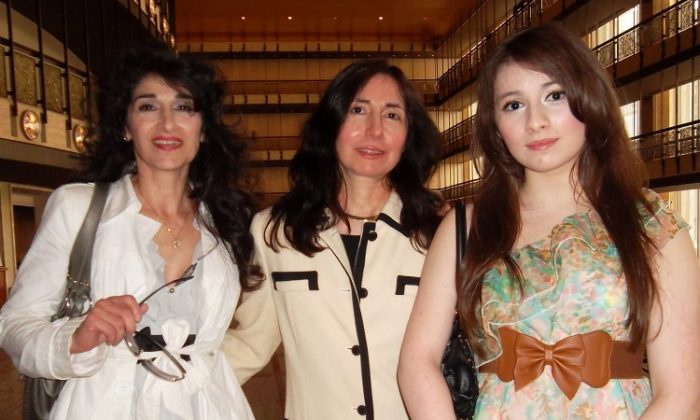 Among the audience were singer Vivian Wong and her mother, Susan Wong, and aunt, Andrea Ticarean.

Vivian was particularly impressed by the classical Chinese dance. “The movements of their dances were very emotional—they were able to convey the emotions without saying anything, which takes a lot of talent on the dancers’ part,” she said.

Classical Chinese dance is at the heart of a Shen Yun performance, a dance form that “has a long history of thousands of years, passed down continuously within the imperial palace and ancient Chinese theater and opera,” according to the company’s website. Numerous ethnic and folk dance styles, accentuate the comprehensive style, with a digital backdrop accompanying the dancers, who are adorned with colorful, handmade costumes.

Another aspect of the performance that stood out for Vivian was Shen Yun’s orchestra, which “seamlessly blend[s]” both classical Western and Chinese instruments, according to the company’s website, such as the 4,000-year-old, two-stringed erhu, also known as the Chinese violin.

“The orchestra was phenomenal,” said Vivian. “The way the percussion got louder, the crescendoes at the exciting parts, it made the emotion—it was amazing.”

Shen Yun is based in New York and tours the world with the mission of reviving the 5,000-year-old, divinely inspired Chinese culture, according to its website. Yet “over the past 60 years, this cultural treasure has been persecuted and co-opted by the Chinese Communist Party. It is outside of China that Shen Yun’s artistic creators have the ability to freely express themselves and their ancient culture. Their courage to speak up is an integral part of Shen Yun’s spirit.”

“Going back to the ancient times was so captivating for me,” Vivian said. “To watch that, I love it.”

Vivian and her aunt were struck by the oppressive situation in modern China portrayed in a dance titled The Choice. According to the program book, the dance tells the story of two friends who part ways after college. Police recruit the young man. The young lady begins to practice Falun Dafa, following the principles of Truth Compassion and Tolerance. The practice becomes outlawed in China. “When followers protest on Tiananmen Square, they are brutally beaten by police.” The young man faces a choice.

“It was very educational,” said Vivian.

Another dance that she enjoyed was Snowflakes Welcoming Spring, where “dancers take small, quick steps through snowy fields as they skillfully spin and twirl sequined handkerchiefs,” according to the program.

“The risks that they take with throwing those things and being able to catch it flawlessly gets the audience very excited,” she said.