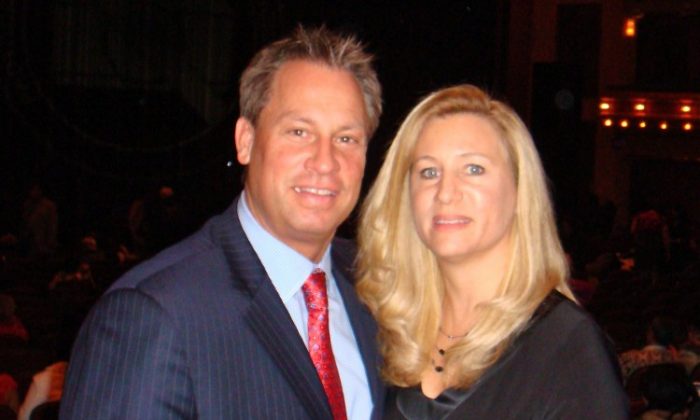 CINCINNATI, Ohio—Rick and Christie Ouellette were the among the appreciative audience attending the opening performance of Shen Yun Performing Arts at Cincinnati’s Aronoff Center for the Arts on Feb. 4. “I’ve enjoyed all of it,” Mr. Ouellette said.

New York-based Shen Yun tours with a company of classical Chinese dancers, stellar vocalists and instrumentalists, and an orchestra of both Western and Chinese instruments. The company aims to revitalize the traditional performing arts of ancient China and bring them to the world.

The view Shen Yun presents on the history of Chinese culture is just what Mr. Ouellette, Vice President of Communications for xpedx, a business of International Paper, liked: “I just think it’s a creative way to show the wonderful things that have happened throughout history with the Chinese culture, so I think it’s a beautiful way to show it and make it enjoyable and fun, but still a lot of learning involved with it.”

In particular he was struck by the way drama helped present culture, and by the creativity involved in the presentation.

Mrs. Ouelette was struck by the beauty of the performance: “I love it visually, I love the colors and the dance.

Two performances  Mrs. Ouelette especially noted were dances by the women in the company.
One program she noted, Lotus Leaves, had lotus maidens dancing as though atop water. The dancers used full-circle fans which appeared like lily pads in the wind, according to the program notes.

She also remarked on Sleeves of Silk, which demonstrated a hallmark of classical Chinese: “water sleeves.” “Acting as extensions of a dancer’s arms, these sleeves linger in the air long after a movement is finished. The effect is akin to fluttering wings or trailing ripples, a visual echo of the performer as she glides from one movement to the next,” is the description in the program book.

“I like the ladies the most; I like the beautiful colors of the lotus, and the sleeves. It was beautiful,” she said.

Summing up her husband’s thought, Ms. Ouelette said she was taking home with her the “the appreciation for the traditional ways in China.”

Shen Yun Performing Arts has three touring companies that perform simultaneously around the world. The Touring Company will be in Raleigh for its next performance.