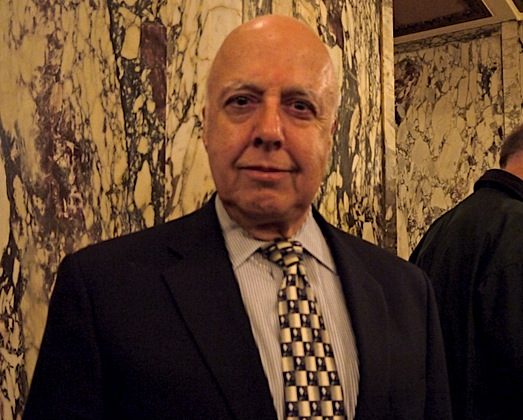 Talat Othman at the Shen Yun Performing Arts performance at the Cadillac Palace in Chicago on May 10, 2013. (Catherine Wen/The Epoch Times)
News

Shen Yun ‘It makes me feel as though I am one with the program,’ Says Investment Banker

CHICAGO —Shen Yun Performing Arts New York Company is at Chicago’s Cadillac Palace from May 10, ending on May 12, Mother’s Day. As the curtain opened on the first dance scene of opening night, the audience responded with a shower of applause.

Among theater-goers was Talat Othman, president of Drobe Financial, who thoroughly enjoyed traveling through 5,000 years of traditional Chinese culture via dance, music, and opera-style solos.

“It makes me feel as though I am one with the program,” the investment banker said, summarizing his experience as excellent, most unusual, and very impressive.

Mr. Othman came with a friend after seeing a brochure on the performance: “It looked interesting and not what you usually see, so I called and got the tickets and here we are.”

Shen Yun’s mission is to bring to life 5,000 years of divinely inspired civilization though classical Chinese dance, orchestral music, and award winning vocal soloists, with 20 mini-dramas that unfold over two and a half hours.

“Actually all of it is impressive. But, what is most impressive are the scenery and the movement within the background,” said Mr. Othman. “That’s most unusual.”

The production features an impressive state-of-the-art animated digital backdrop for each scene, transporting the audience to faraway places, and the dancers from earth to heaven and back.

This detailed animated backdrop is used to spectacular effect in the dance program, Sand Monk is Blessed. In a scene from the Chinese classic Journey to the West, colorful characters come to life, especially the shape-shifting, man-eating river ogre.

“That was most impressive,” Mr. Othman said. “It was unusual; this is not the sort of scene that you would see in other places.”

Shen Yun’s orchestra combines traditional instruments from both the East and West, creating a unique sound that adds another dimension to the vivid storytelling.

Mr. Othman said he will recommend Shen Yun to his friends.

“They would be very well entertained. They will see something unusual that I’m sure they have never seen before, and it will be a very pleasant experience. Unfortunately [Shen Yun is] only here for three days.”