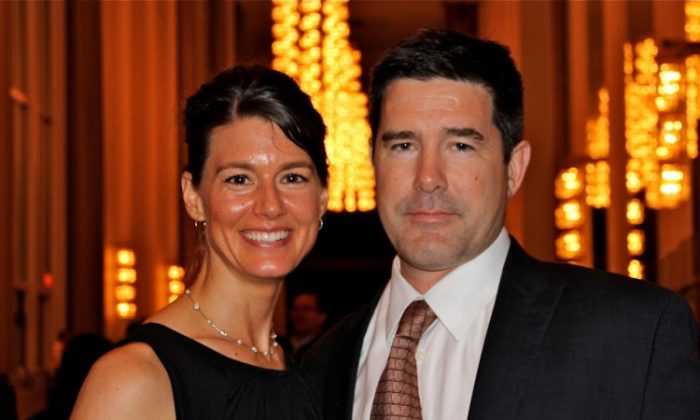 WASHINGTON—It was an enthusiastic audience that attended the Kennedy Center Opera House in Washington D.C. to see Shen Yun Performing Arts Touring Company on Saturday, March 24. The house was full and there was much applause, drawing an encore from soprano Haolan Geng.

Ms. Michele McVenes, an airline pilot for the A320, and her partner Jim, who works in intelligence in the military, knew little about China or its culture but found Shen Yun a new and welcome experience.

Ms. McVenes loved the dancing and noted particularly the costumes, which are hand-made and span China’s dynasties, regions, and ethnic groups.

“It was beautiful to see the costumes that they made, the intricacy and all the detail,” she said.

Ms. McVenes was surprised to learn that rather than martial arts and acrobatics influencing classical Chinese dance, it was actually China’s traditional dance that was the source of all these later schools.

“Like the United States, we pulled and the world has pulled a lot from ancient Chinese culture, so that was pretty amazing,” she said.

Jim was fascinated with the dancing, seeing beyond the athletic movement to something much deeper.

“The movements were so beautiful. It just made me think that the human body is sacred in the way that we move ourselves, the way of our spiritual holiness,” he said.

“In the West, we like to express ourselves with a lot of words as we stand still, and that was just such a beautiful way to express so many emotions without speaking,” he added.

Ms. McVenes noted the incredible difference in age between American and Chinese cultures saying: “It makes you realize the history and how young we are as a culture and all that goes into it—the fact that it has been going on for so many years and it can withstand the test of time.”

She said she would recommend her friends to go and see Shen Yun, saying, “I don’t know how anyone can not enjoy it, a presentation like this, it’s beautiful.”

Jim agreed saying, “I think we need more of it.”