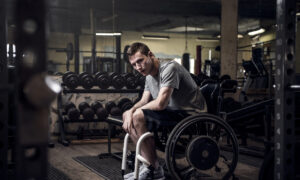 DES MOINES, Iowa—Shen Yun Performing Arts tours six months out of the year to provide audiences around the world a cultural experience, specifically the experience of traditional Chinese civilization. This culture is inspired from the divine and spans 5,000 years, thus providing countless sources of legends, myths, literary classics, and actual events, both past and modern day to draw from.

Shen Yun’s beautiful portrayal of traditional culture and spirituality through classical Chinese dance and a live orchestra heartened several people who attended the matinee on March 21 at the Des Moines Civic Center.

“Fantastic is not a good enough word, as good a word,” Jackie Van Ahn said. “It is just amazing—the dancing, color of the costuming, and just the moves that they do, is very, very beautiful. It is just absolutely out-of-this world,” she said.

Ms. Van Ahn retired as a consultant for HRLink, a company she established. Prior to that she was senior vice president of human resources at Kirke-Van Orsdel, a 25,000 employee insurance company, and one she worked for a total of 25 years.

The ideals and values presented by Shen Yun’s mini-drama dances are those constantly played out over the 5,000 year history. They include the need for “balance between man and nature, the respect of the divine, and the virtues of benevolence, righteousness, propriety, wisdom, and faithfulness,” according to the Shen Yun website.

Shen Yun’s mission is to restore authentic Chinese culture and traditional arts which were almost decimated under 60 years of Communist rule. “That is why you cannot see a performance like Shen Yun in China today,” states the Shen Yun website.

Shen Yun was established in 2006 and is based in New York so that artists can freely express the traditional culture to its fullest and grandest extent.

“You cannot see this in China. What a shame,” Ms. Van Ahn said.

‘The Spiritual Aspect of People Is Very Important’

“I really enjoyed the show. The colors were fabulous, and the dancing of course is exceptional,” said Richard Cleaveland, who is an architect.

“I also like the music. I particularly enjoy classical music, so this combination of classical and Chinese is very nice,” he said.

“The performance was … getting people to think beyond just life on this earth. About heaven, or that there is more to this life than just the physical,” he said.

‘It Touches Me Deeply’

Tai chi instructor and retiree, Ms. Becky Goldin was also in attendance. “My impression is that it really captures the spirit of the beautiful people of China. And the grace and the stories are very remarkable. It touches me deeply,” she said.

“We are from the United States [with a history of] 200 years; this is 5,000 years. It is as if it takes us back to the ancient time and understanding that goodness and beauty flows throughout all of time, even today,” she said.

“I have a special love for the beauty of movement, and [for] China,” she said.

“We only understand one another when we open ourselves up to showing who we are. And this is a beautiful representation of that,” Ms. Goldin said.

She came to the performance with Ruth Kneile, who is also a certified tai chi instructor, a retired music teacher. “This is beautifully done, and a good message to me about goodness and caring,” said Ms. Kneile.

With her interest in Chinese culture, she found Shen Yun to be educational. “I understand better now the diversity that is within China, culturally and geographically. … It becomes more real to me when I watch this,” she said.

Ms. Goldin recommends that others see Shen Yun. “If nothing else, you would be blown away by the beauty of the color and the stories. It is a beautiful presentation,” she said.