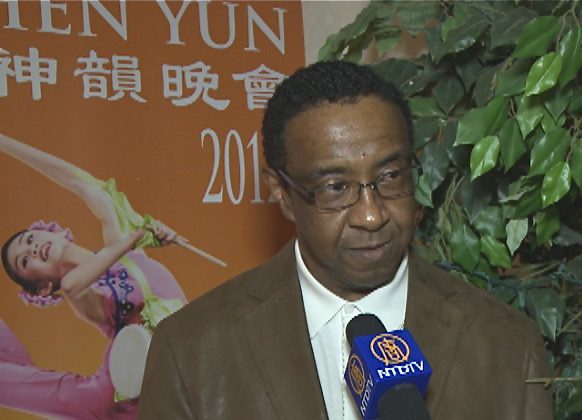 TOLEDO, Ohio—A heart-felt wish finally came true for Mr. Clarence Coleman when he caught the opening performance of Shen Yun Performing Arts at the Stranahan Theater Saturday evening, March 17. “This is something I wanted to attend many years ago but it seemed like every year something came up so I was determined to make it this year, and I will be back again!

The people of China have long held that their magnificent culture was a gift from the heavens. Artists cultivated virtue because they felt that to create art worthy of the divine, there must first be inner beauty and purity, according to Shen Yun’s website.

The performances resonated deeply with the Commissioner of Taxation and Treasury for the City of Toledo, “You could feel the performance. You can feel that the artists when they sing, it is coming out of their soul. The dance is coming from their spirit and you can really feel that when they are dancing and performing, it makes you feel a part of the performance itself.”

Classical Chinese dance is one of the most complex, expressive and demanding art forms in the world. Shen Yun artists believe that just mastering the surface of the art is not enough, as it is the heart of the artist that the audience feels. “And it’s something that just touches your heart and touches your soul. It’s just so real!” exclaimed Mr. Coleman.

He was deeply moved by the opening performance, An Era Begins. As China’s glorious culture is flourishing, a demon hoard suddenly descends to Earth, assuming human form.

The resounding voices of bel canto soloists are an integral part of Shen Yun. Mr. Coleman expressed his amazement and said, “Well, just the vocal cords and the ability to hit those notes and to sustain those [notes], it was just very beautiful. And the very last performance by the soprano— was just really heart felt! [Before Disaster, The Divine is Rescuing] Just wonderful performance! The arts, the music, the sopranos, the tenors, everything was just beautiful!”

Mr. Coleman felt the performances had profound inner meanings. “The message I got was one of unity, one of culture, one of diversity, one of compassion … good vs. evil, that message was portrayed very, very well.”

He was delighted Shen Yun had returned to Toledo and felt it was beneficial for the community. “It is very good and I will take a lot back from it. Next year, I’ll encourage some of my friends and family to come and be a part of it for the first time. I think it is good for the city of Toledo and next year when you come back, you’ll see even more people.”