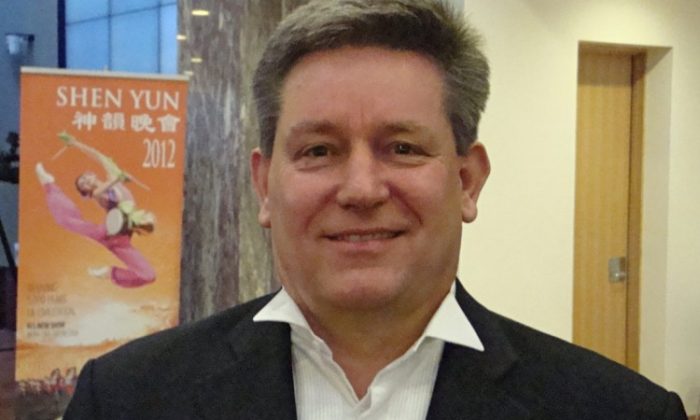 “I don’t know why I put off coming last year,” he said. “I told the guys [people at the theatre] as I walked out the door, I will be on time and I will see you in 12 months.”

Classical Chinese dance, grounded in traditional culture, is at the heart of a Shen Yun performance.
It has a long history of thousands of years, passed down continuously within the imperial palace and ancient Chinese theater and opera. Soaking up profound wisdom from every era and dynasty, it has become a complete system of dance embodying traditional aesthetic principles with its unique dance movements, rhythms, and inner meaning, states the company’s website.

Mr. Gabb said the dance was “wonderful,” and he found it phenomenal that it was thousands of years in the making.

Of interest for Mr. Gabb were the story-based dances that portrayed repression of belief in modern-day China and the persecution of the spiritual group Falun Dafa, which bases its teachings on truthfulness, compassion and tolerance.

“It was great that they depicted the winner [being] the people trying to practice their beliefs and religion,” he said.

The backdrops were also amazing and meaningful to the understanding of ancient Chinese culture, said Mr. Gabb.

“[They were] fantastic and how they do it, I don’t know. It was brilliant, exhilarating,” he said referring to the backdrops.

Using hi-tech graphics Shen Yun creates backdrops with animated settings that extend the stage and take the audience into a different world.

Mr. Gabb said that he had a wonderful experience and would recommend Shen Yun to his friends and colleagues.