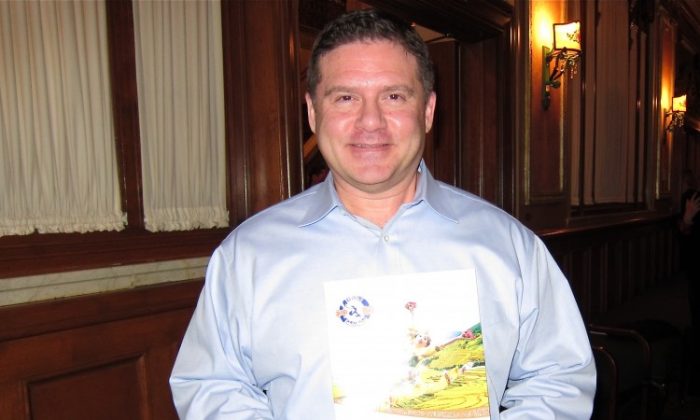 The New York-based Shen Yun Performing Arts has three touring companies that perform simultaneously around the world. The company is on a mission to revive the great cultural legacy of China’s 5,000 years of civilization—a rich tradition that has nearly been wiped out by decades of Communist rule.

Mr. Jeffers, a PNC Bank Vice President, says it’s always a good thing to be entertained by a show, but he also values learning something as well. He praised Shen Yun for delivering on both qualities.

“It’s very artistic, and that’s what I expected,” he said. “But it was nice to actually get some education along with being entertained.”

Mr. Jeffers is no stranger to dance. He recounted his younger days in an Eastern European folk dance troupe that traveled through Russia, Ukraine, Croatia, Bulgaria, Hungary, Romania, as well as in the U.S. Jeffers made comparisons to these dance styles, and those of the Far East as seen in Shen Yun.

“There were some dances that reminded me of some of my ethnic heritage, which is in Eastern Europe—a lot of Pittsburghers are from Eastern Europe,” said Mr. Jeffers. “it was the same sort of cultural dynamic that’s trying to be expressed here.”

Mr. Jeffers described the “flowing motions” of the lotus dancing, and the fluttering garments in the flower dancing, but he was also intrigued by the poise and grandeur reflected in Shen Yun’s portrayal of ancient Chinese life.

Mr. Zhu was a professional violinist from a first-class opera company in southern China before immigrating to America. At present, he owns a music store in Pennsylvania. He watched Shen Yun perform with his wife and a friend.

Mr. Zhu said that Shen Yun’s live orchestra was magnificent and that it synchronized extremely well with the dances.  “Shen Yun brought 5000 years of Chinese culture onto the stage, and is staged all over the world. It’s Excellent!! It presents the history and culture of China,” he said.

His wife, Lily, was once an actress. She found the effects of the backdrops on the stage marvelous.

Their Chinese friend indicated the color coordination throughout the performance was very bright and beautiful, “It is extraordinary!”

Shen Yun Performing Arts Touring Company will next perform once more in St. Louis at the Peabody Opera House, on Sunday Feb. 19. at 7:30pm